Let’s hop straight again to Day 5 with some GUI tweaks, meta discussion and some more settings to change.

Rant Warning - wall of text ahead (then some REAPER things).

I’d like to address some of these points from my perspective, and rant a bit. To keep things a bit balanced, I spent a day thinking as a “purist” (my default mode of thinking about UI) and as a pragmatist (your average user, including me when I’m using software and not consciously thinking about it). I believe both the purist and pragmatist are capable of recognizing the pros and cons of something within their mental model of how things should work.

I hate menus, except when I love them.

To summarize, I believe menus serve a great way to explore functionality, but when relied upon for regular use they erode the user experience in subtle but destructive ways.

Putting content in floating windows is unpredictable. It decontextualizes functionality by taking the interactive elements and separating them from what you are interacting with. Their repeatability is poor (unless tied to the main UI). They complicate input focus. They eclipse potentially useful GUI elements behind them.

Menus have their place.

The whole OS is windows! (unless you using a tiling WM or similar… like I do). It’s the dominant GUI paradigm for a reason.

I separated out the concepts of menus and windows, but menus are windows.

Menus are a window system with rules about display location. Menus have pecking order bakend in. Menus restrict widgets to lines of highlighted text.

Windows have fewer (practically no) restrictions in modern desktop environments. You can display anything, anywhere, anytime. The flexibility provides the ability to do amazing things, but also implies a responsibility that many developers shirk.

Menus are easy. Windows are hard.

Developers, at least try to get your menus right before you start throwing modal dialogs and custom windows at me.

I’m obviously a purist by default, but I understand that tradeoffs must be made at points, and not all users approach using software the same way that I do.

Configuring REAPER is an exercise in aiming for perfect, and settling for “almost good enough”. The sheer amount of functionality can outweigh the difficulty in using it. 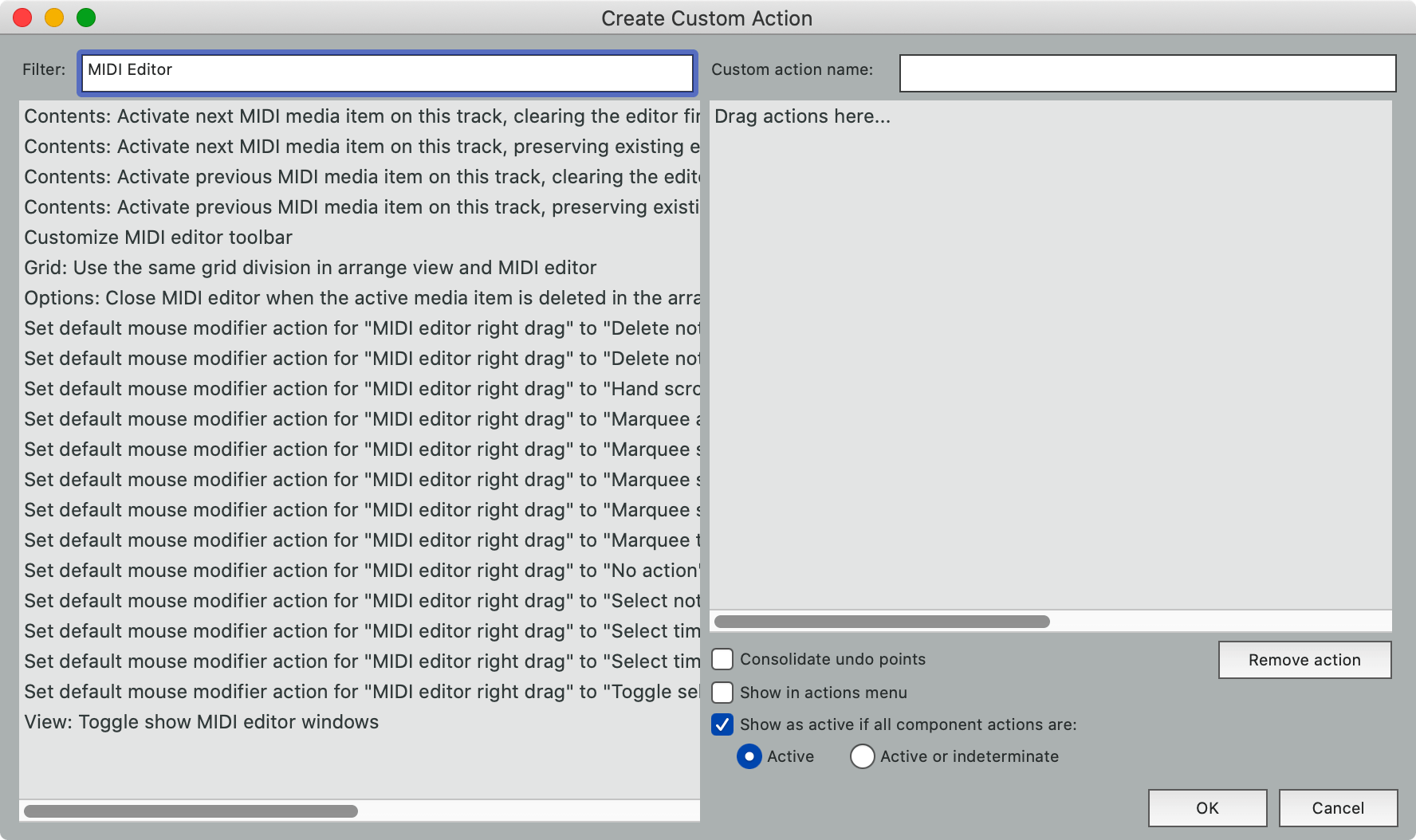 If you’ve followed along then you’ve noticed that moving from the MIDI screenset to the Recording screenset leaves the MIDI editor open, but smaller. I need to fix this.

I need the key that opens the Record Screenset F4 to do two actions: Close the MIDI Editor and load Screenset #2.

That means if I go from Mix->Record, there would be no MIDI editor in the Mix screenset and it would be turned on in my Recording Screenset. Gross.

REAPER does not appear to have a “Close MIDI Editor” action. Hopefully someone will correct me, but until then…

It’s time to get clever and write our first script!

I need to close the MIDI editor, but the “Close Window” command works on what’s focused. How can I send that command to just the MIDI Editor window?

First thing is to go to help->ReaScript documentation and search around until I found “MIDIEditor_LastFocused_OnCommand”1. That function allows me to send a command to the last focused MIDI Editor, and since I only have one…

In the ReaScript we want to switch to Screenset #2 and then close the MIDI editor. That looks like this:

reaper. precedes the functions so that REAPER understands we’re calling its functions and not something of our own making. The 0 in the first commands says that we’re sending no other information, and false tells it that we’re not a “listviewcommand”.

Now when I open my “Record” screenset, the MIDI Editor window will always close.

That was a lot of effort just to make REAPER behave in a sensible way, and I’m not even convinced that this isn’t caused by some subtle way I setup my Screesets or MIDI Editor settings!

However, in no other major DAW could we solve this problem on our own in such a straightforward way.

You win some, you lose some. 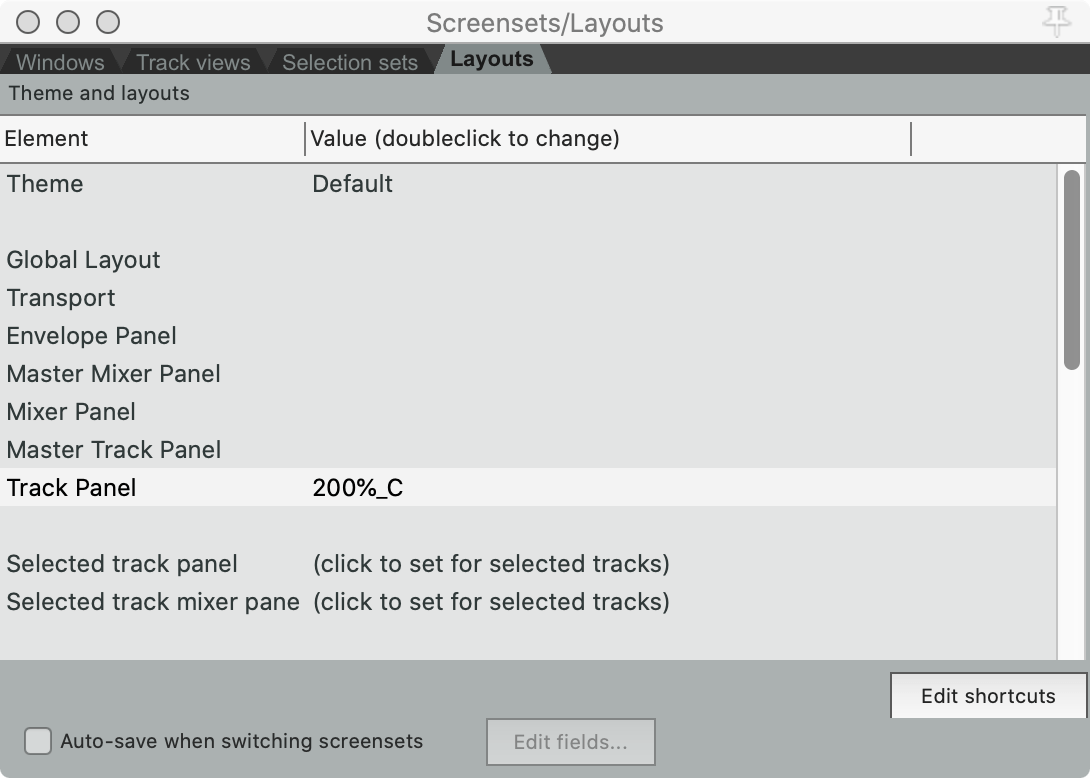 I like to see the following items in my track control panel:

I can get these (and a few extras) by going to View->Screensets/Layouts->Layouts and selecting “200%_C” for Track Panel.

This setting does not save globally, so I must go back to the Windows tab, load each screenset, set the setting in the Layouts tab, then use my “Save Windowset” action (which is Shift+load key).

I do not add this to my Mixer Screenset.

For my Mixer, I do not care about any TCP Controls, so I set it to “50%_B (DPI-Translated to B)” which gives me the most controls in the smallest space. 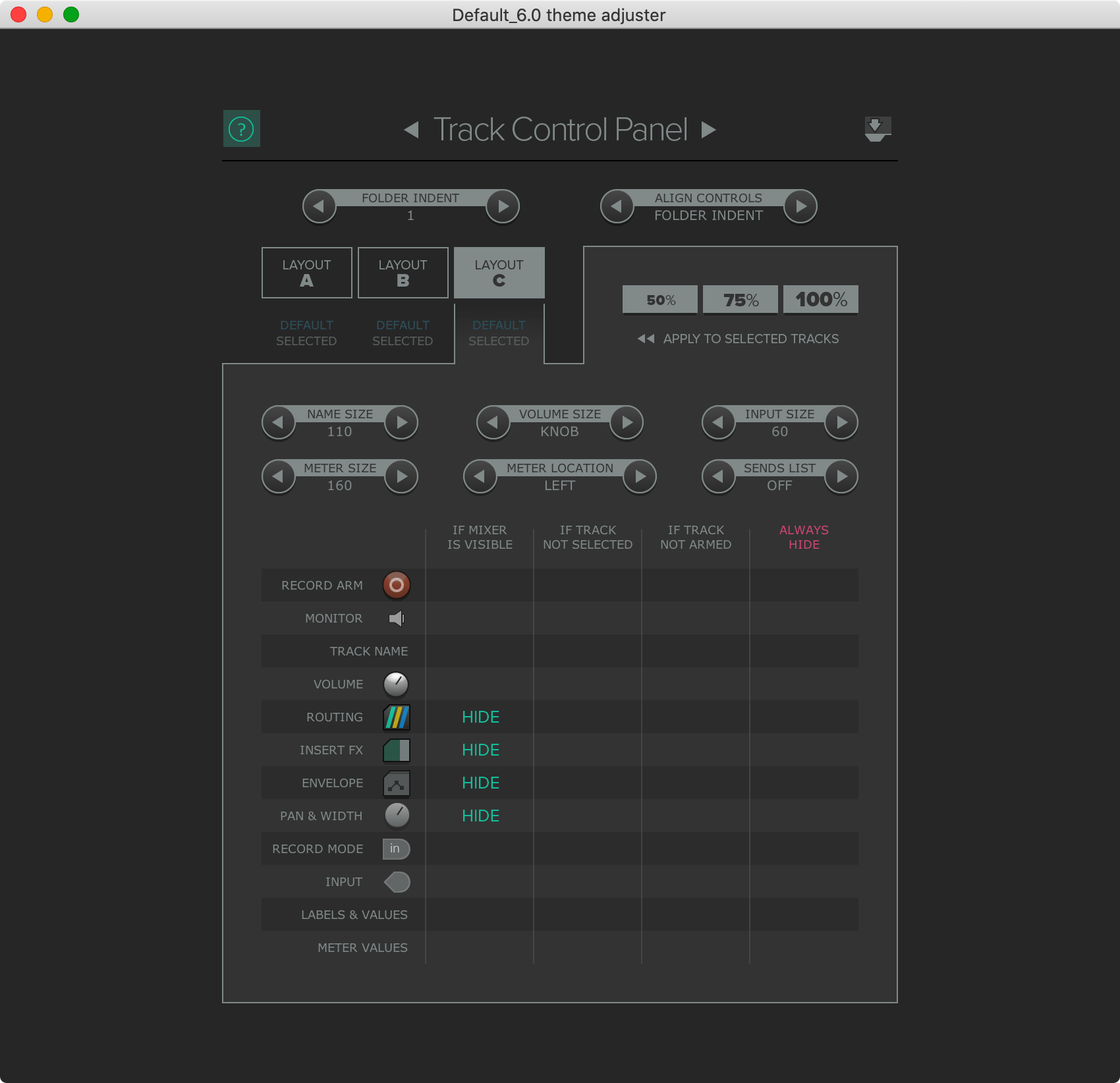 I dislike when controls hide if there’s sufficient space for them. There’s a fine line between visual clutter and requiring the user to interact with a specific element to get common information.

I don’t mind the TCP changing when the Mixer is up since I never look at the TCP. I leave the “If mixer is visble” controls at their defaults. 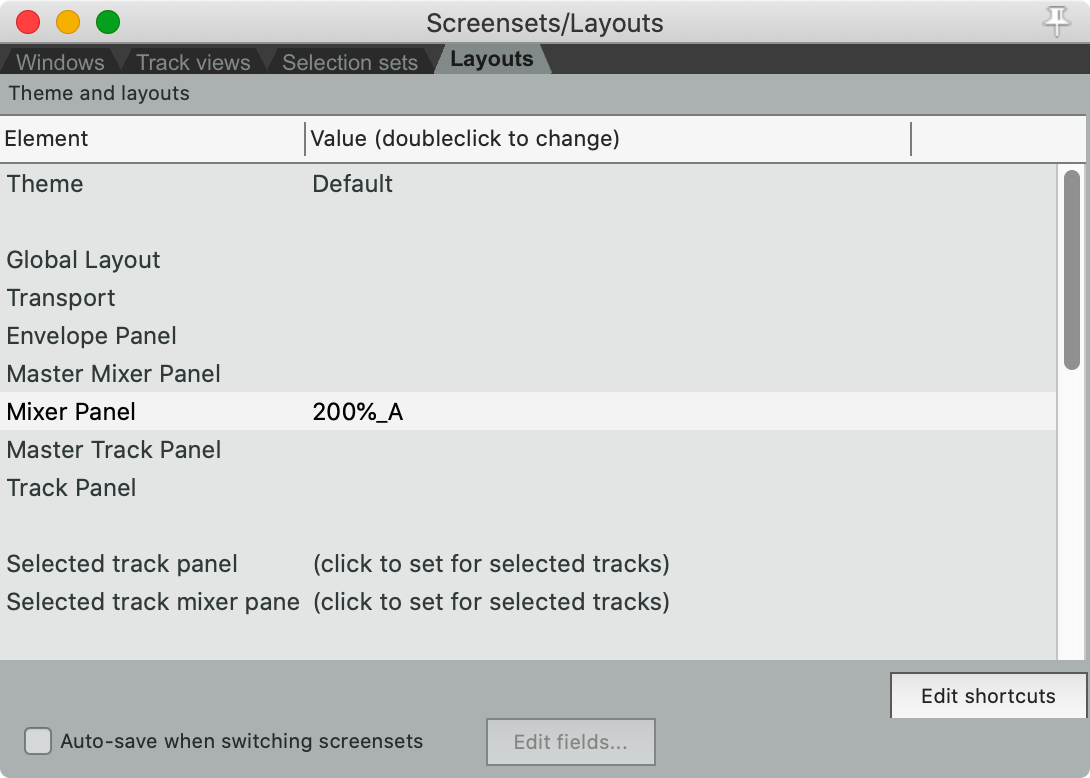 For the Mixer Panel I want the following controls:

I can get these (and a few extras) by going to View->Screensets/Layouts->Layouts and selecting “200%_A” for Mixer Panel, and this allows me to apply some changes in the Theme Adjuster.

Then I need to change the track height, which I do by creating a track then grabbing the bar just below the sends. Then I delete the track and make a new one to… UGH. The fader height (or effects/send height if you want to view it that way) doesn’t save.

You can select multiple tracks then hold alt or option while dragging the height. That will set them all to the same size, but I don’t know of any way to have new tracks create with the appropriate height without editing the theme. 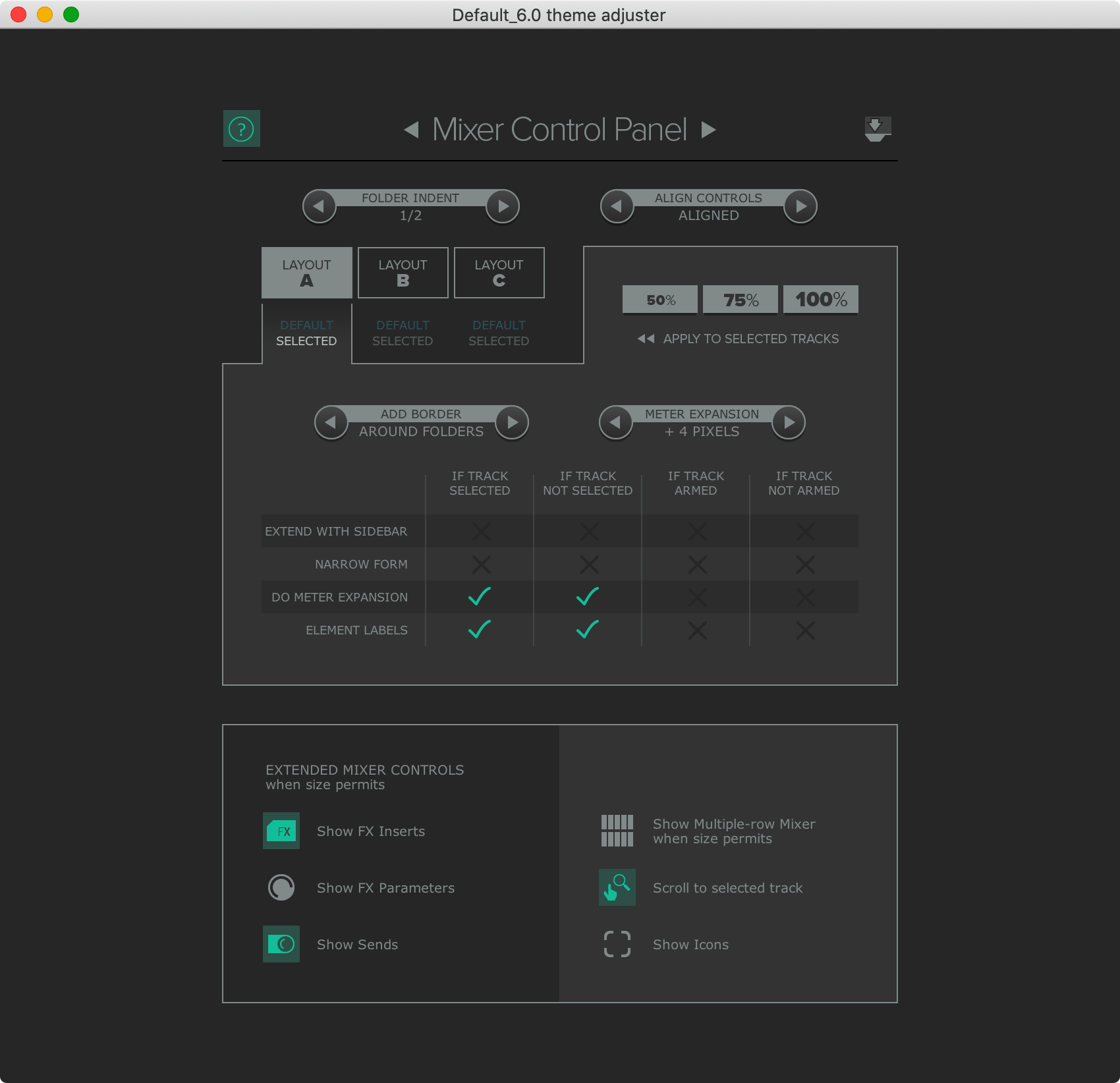 Folders can be difficult to identify in the Mixer, so I like a strong visual indicator of the Parent->Child relationships.

Undo settings are in Preferences->General

Startup settings are in Preferences->General

Paths settings are in Preferences->General->Paths

~ in a path means “User directory” on macOS and Linux. 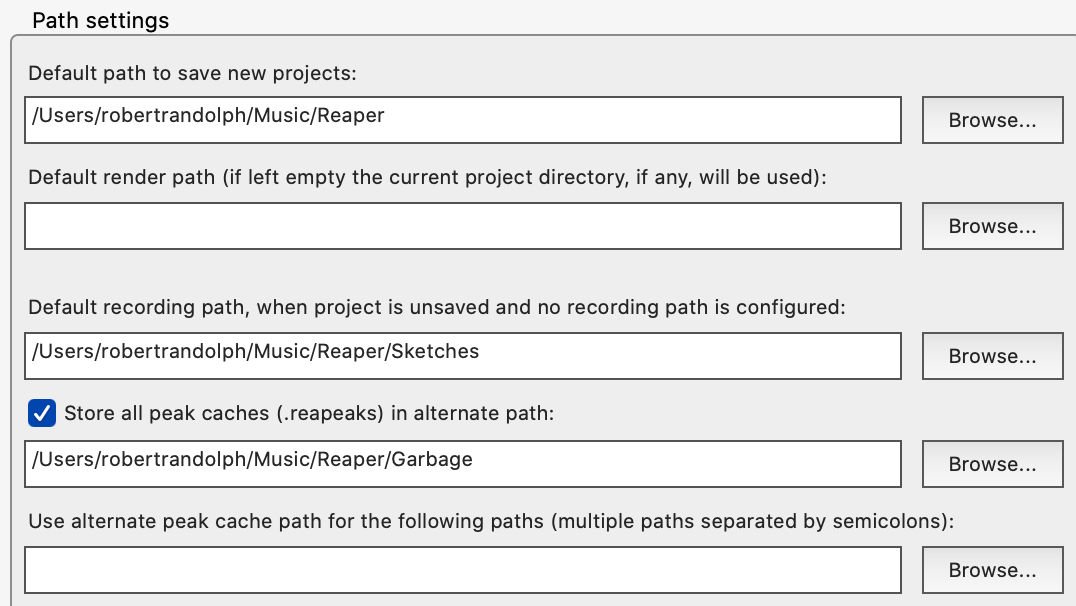 Buffering settings are in Preferences->Audio->Buffering

I have a fast computer, I dislike latency of any sort, even at the expense of performance. That includes live-monitoring latency and latency of controls.

I also use a UA Apollo and UAD plugins which do not work with anticipative processing very well. 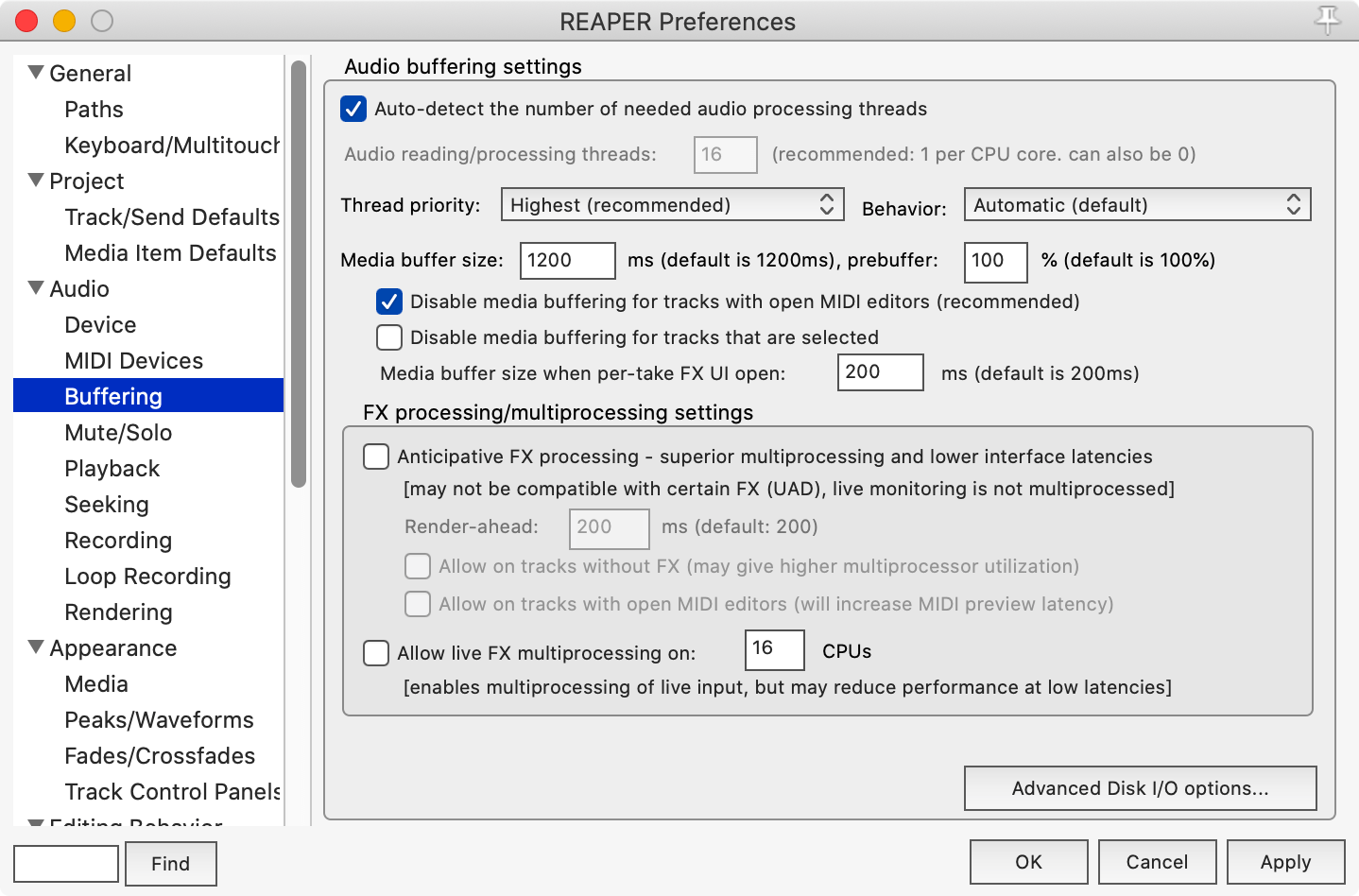 Buffering settings are in Preferences->Audio->Loop Recording

I loop record frequently, and the default settings are silly. Almost every other DAW discards takes if not completed, since most users don’t want slivers of guitar noise while they reach for the stop button. Neither do I.

I prefer safety when recording as well. REAPER defaults to writing files after the entire looping process is finished. This makes recovery from a crash or mistake difficult (or impossible)

As of this writing, this dialog appears to use “Full” and “Complete” to mean the same thing, even though you can change the meaning of “Complete” to <100%. I think that most users will view the word “Full” as always meaning 100%. This is confusing. 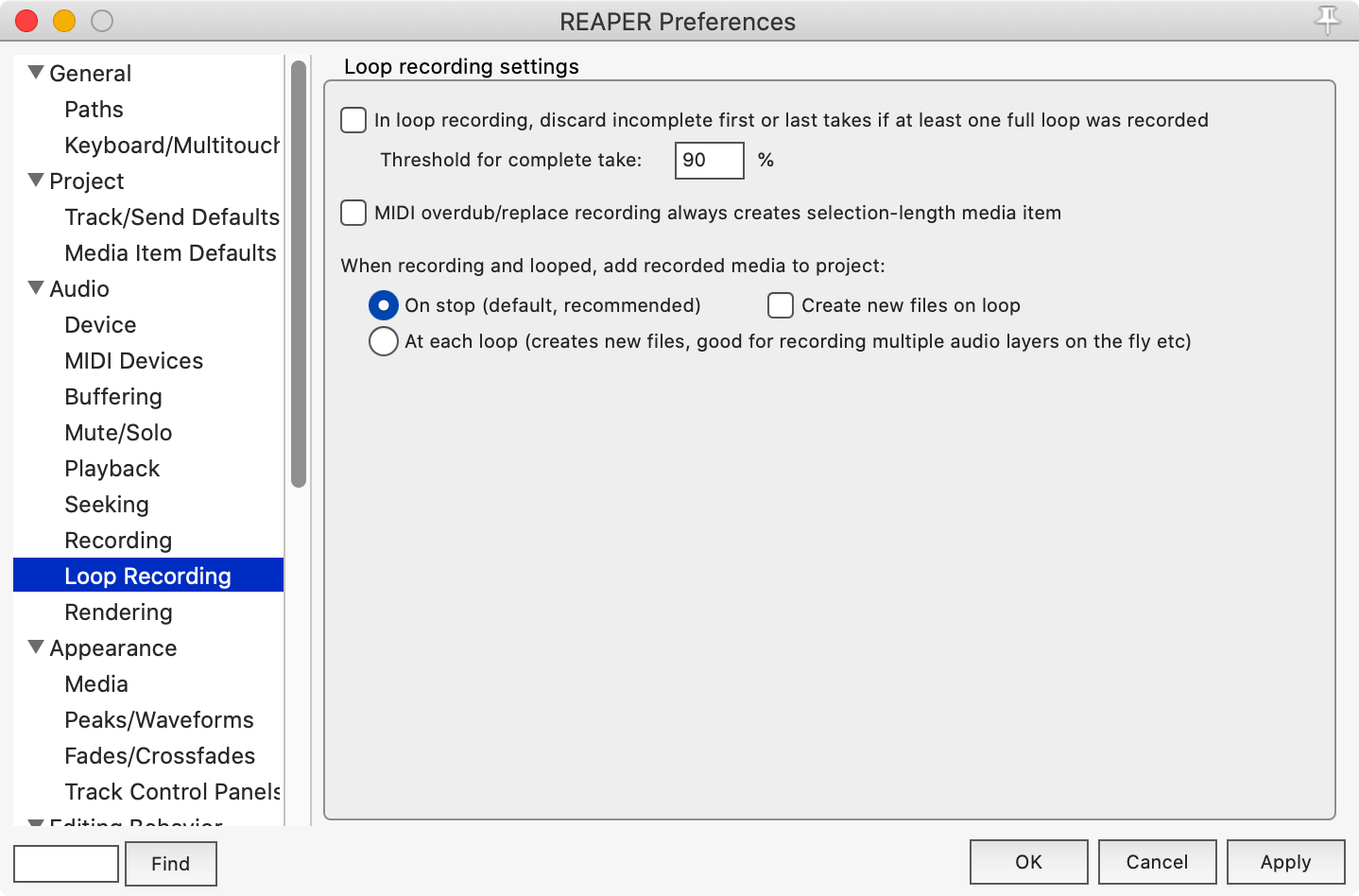 It might seem like I’ve spent more time writing about REAPER than using it due to all this ranting and a few sections about settings.

To the contrary, I’ve spent quite a bit of time using REAPER as vanilla as possible and trying to understand the bare minimum number of things that I can change. This has been painful as I expected. REAPER has some of the strangest defaults, and I struggle to understand most of them as anything more than “What will keep support emails down.”

As usual, I’ll be excited to receive corrections or suggestions from my awesome readers.