Short post today to design the MIDI Editor interactions to my liking.

This is all text, and ideas for my interaction with the MIDI editor on a fairly basic level. I’m posting this to get feedback and let myself sit on it before I start changing a bunch of actions.

If you’ve read the previous posts then you’d know that I prefer working 100% keyboard if possible. This means that I need a few general commands:

I’m not considering MIDI cc, as I believe that’s almost universally best input via mouse or MIDI controller. I may change my mind at some point though.

A note on note movement

NOTE - Assuming 12-tet, because that’s all I work in anymore.

I’m a believer in composability of keyboard commands, which implies some sort of grammar.

Start with a set of clear, non-complex commands, then build up larger actions from these commands. Western music allows me (us?) to build a dictionary of 4 commands:

Most western harmony is built on thirds, and even when it isn’t - it is. Let me go through every interval up to 13ths and map out the use of the previous 4 commands:

Now how these can be composed for quickly moving notes using the letter in the parentheses. + for shift up in pitch, - for shift down in pitch.

Any of these commands can be executed in any order, and b9 and higher are the same, but with O prefixed.

The worst case scenario is the dominant 7th, and 9th to 15th with 3 key presses. With some practice it should be possible to type these approximately as fast as reaching to grab the mouse or a single command with modifier keys.

This is a form of binary search, I guess a quaternary search?

I hope the astute reader was rolling their eyes a bit at the last part. What’s easier than the above? Playing it on an instrument.

The major of input will be from the piano for me, however there are times where I will want to select a note and make a small change or when I want to work on my laptop.

I will be setting this up though! 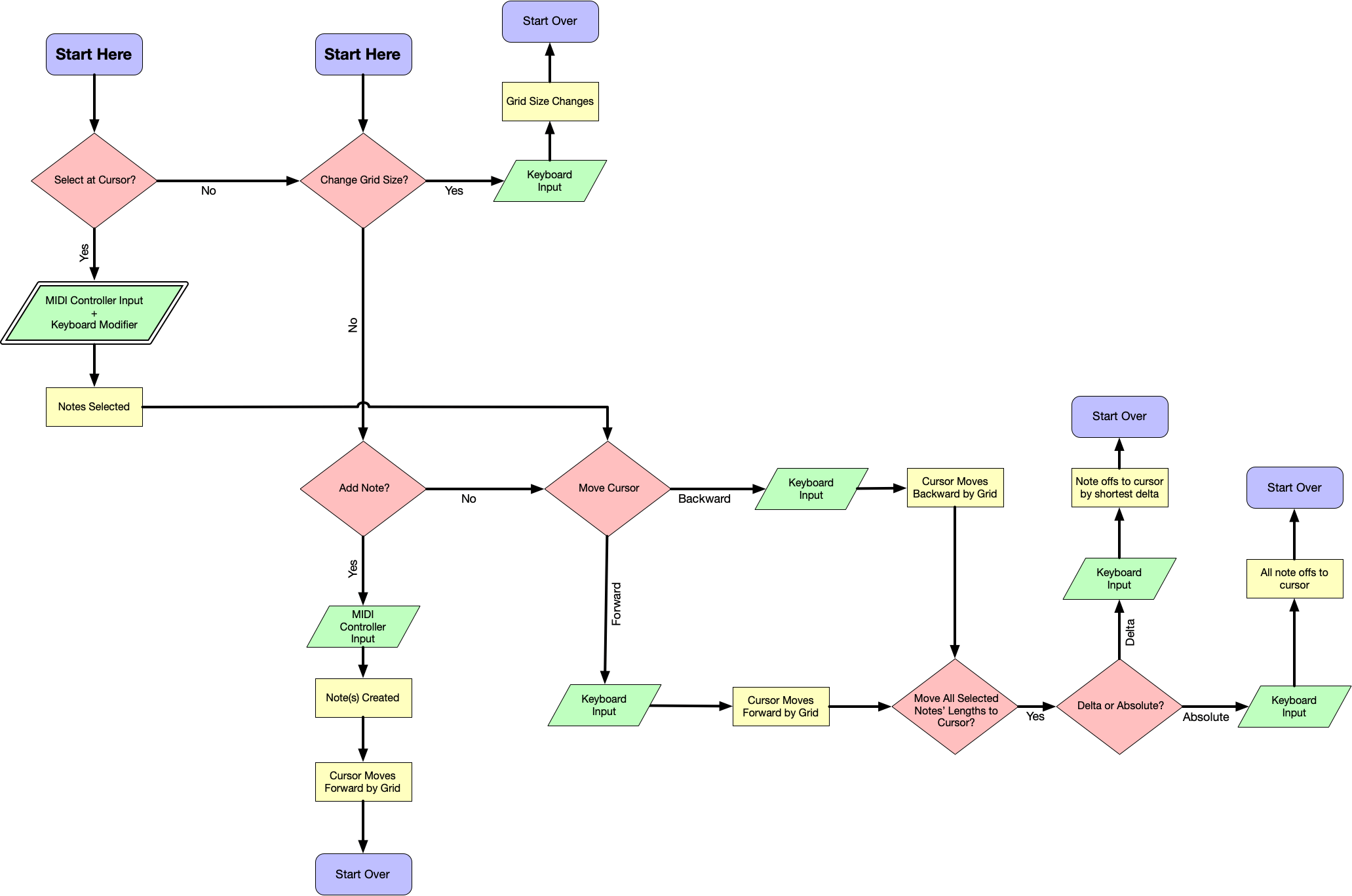 Most DAWs have some concept of “Step Input”. The idea is that cursor control is driven by input, and cursor movement and note length are controlled by a grid value.

As a bonus I like if I have some way to:

Then I’m quite happy.

Once again, n-division narrowing buys us a lot of functionality with few commands:

The existence of a grid simplifies cursor movement, and note length and selection.

I generally only use the following grid positions, which I believe are enough to get to the common locations in 3 or fewer key presses.

The bolded number is the hotkey I use, this is non negotiable since I already use these in other DAWs.

(Note that triplets are DivisionNumber+1.)

Thus far I’ve discussed topics that allow me to work on individual notes in some manner (besides piano input). MIDI editing and input require working on multiple notes at a time which means some method of marking notes to be worked on.

Time is contiguous in most linear DAWs, so I won’t concern myself with multiple time selections.

Note selection is often non-contiguous. I believe the best method is to have a method of selecting all notes at the cursor via MIDI input. If that’s not an option, then I will need to rethink.

Note split can happen with a time selection or at the cursor. There are two types of selections:

I’d like “At cursor” and “At selection” to be separate commands. I don’t think that I’ll use different selection commands such as “at start”, “at end” and “both”.

Given a number of selected notes, it should be possible to do two actions:

This is a brain dump of thoughts about MIDI note editing. Almost all of these apply to item editing as well.

I welcome comments about things I missed or ideas to explore.