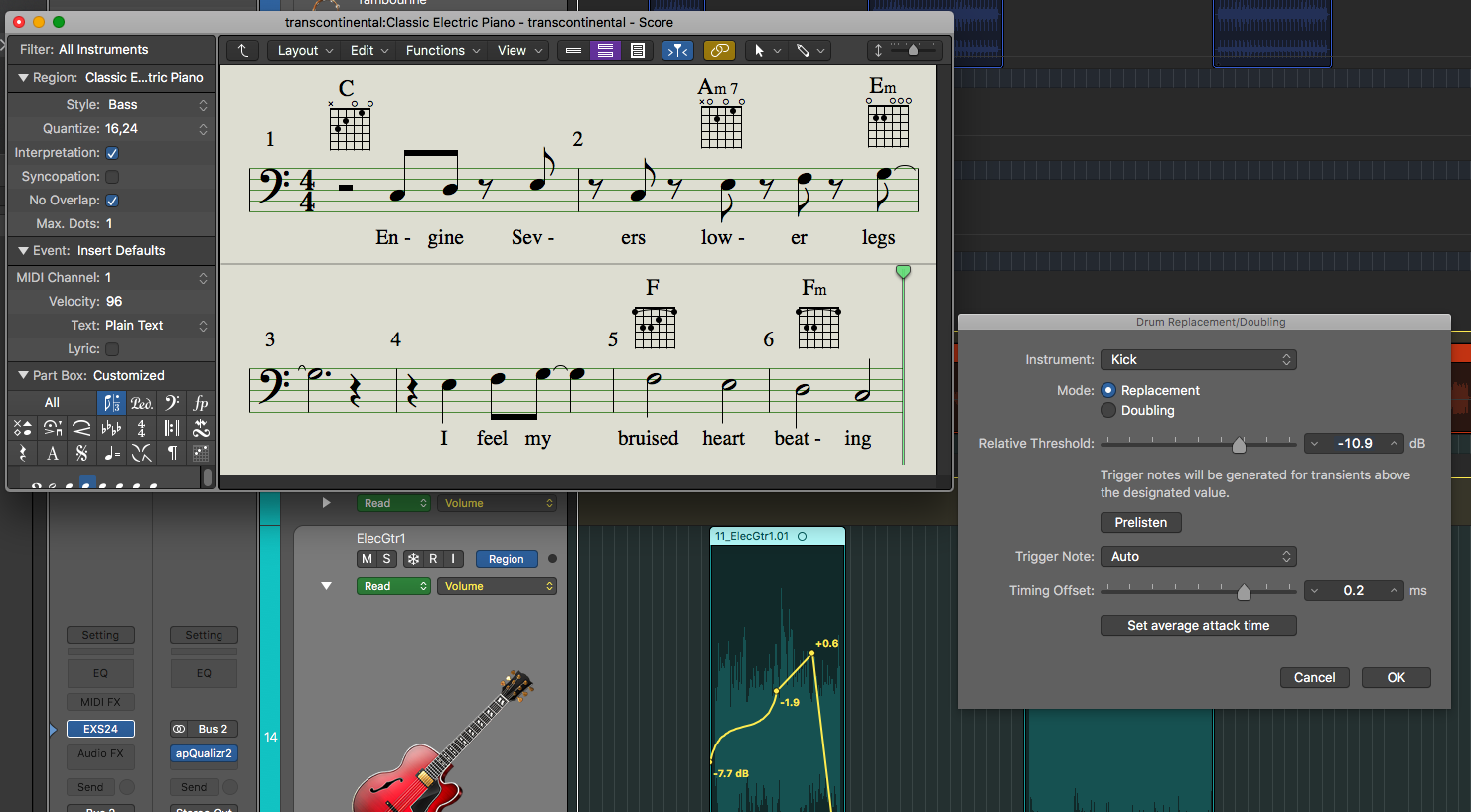 Here it comes! The part where I do a little mini-series on some cool features in Logic Pro X while I spend a month using it.

All three of these are not major unique features, but instead are quality of life-improvements. Little things that other DAWs also do, but not as well or as easily.

Region and track based automation toggling back and forth

If you come from another DAW like Ableton Live then this may not be too exciting for you. In the context of everything else that Logic offers, a Live user may find this to be a welcome feature when crossing over. For everyone else, it’s a great workflow enhancement.

Logic’s automation can be constrained to regions. This means that any automation data can be contained by the region, instead of on the track. This eliminates the mess of having automation being copied/moved/overwritten as you move your regions around when composing. Region-based automation always moves with the region.

Even for simple things like toggling an effect on/off anytime that region appears, it’s wonderful. Region-based automation also loops with the region when you loop it! It’s a very simple feature that can be exhilarating if you have dealt with a product that only has track-based automation.

Regardless of this issue, for simple automation that needs to be retained with a region it’s a very handy feature. 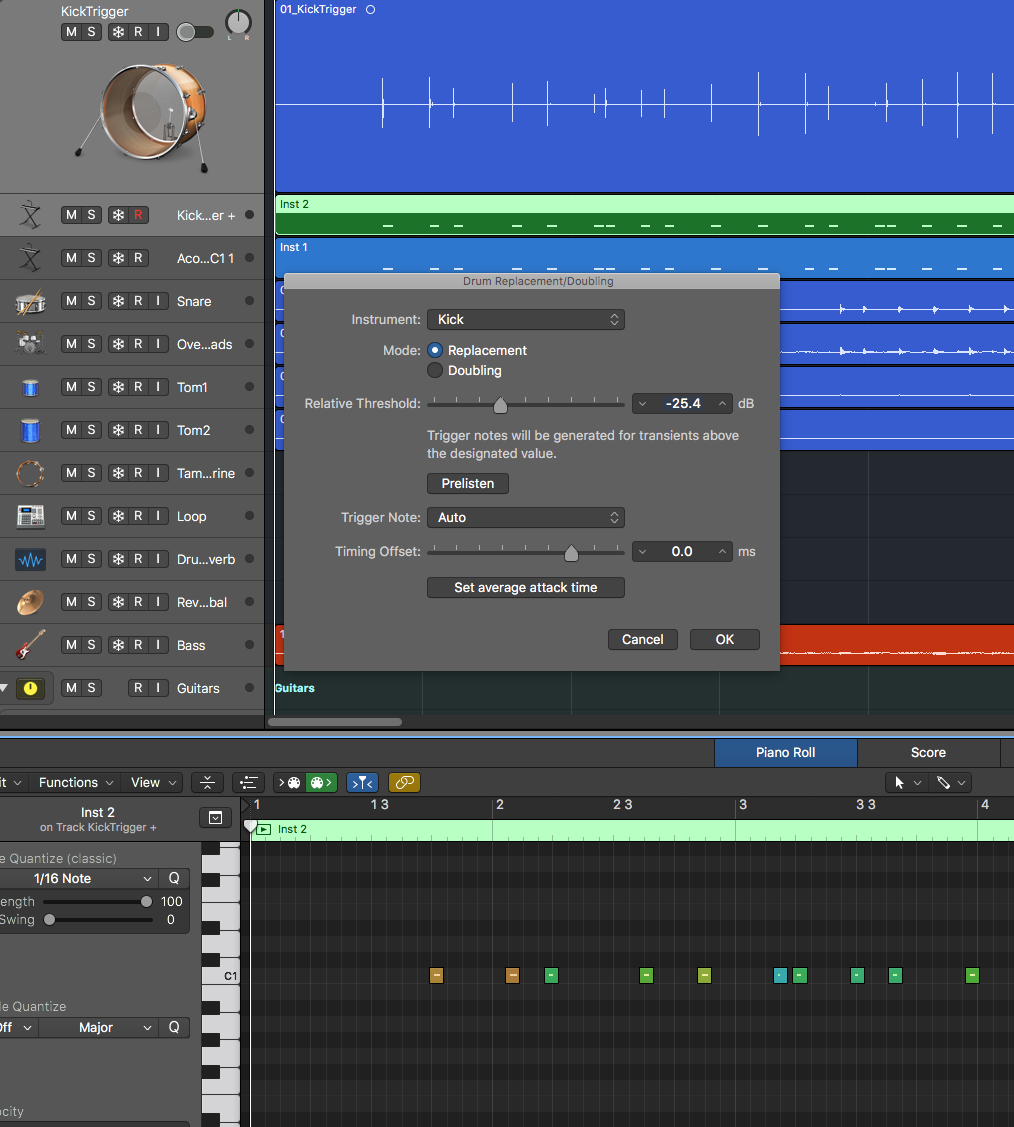 Drum triggering is a simple concept. You record some sort of transient heavy signal like a drum, drum trigger or even a simple piezo sensor. Then you turn that recording to midi notes and feed those midi notes in to a sampler that triggers an appropriate drum sound. Replacing the sound can fix an awful recording, or doubling the sound can provide some extra beef to something that’s nearly there. Triggering a sample from an audio track is something you can do in basically every major DAW, but Logic greatly simplifies this process.

Logic has a feature called ‘Replace or Double Drum Track’ that does this process simply. You simply select the track that you wish to replace or double, then use this feature.

In the image above you can see the recorded drum triggers at the top, the ‘Replace or Double Drum Track’ dialog and the resulting midi track at the bottom. Here’s what the various parameters do in the dialog:

The resulting midi is velocity sensitive and accurate. This means that with a good quality multi-sample drum library, the resulting sound will be much more natural than some other trigger methods.

Of course, the resulting midi can be edited as you wish and you can even re-apply the trigger settings differently if needed.

The net result is a very quick workflow for replacing drums that is easily superior to anything else I’ve used in another DAW product. The quality of results for the time spent is excellent.

Maybe you don’t record live drums, but you can still use this feature to your advantage even if you’re on a coffee shop on your laptop.

Simply setup a new audio track and record yourself lightly tapping on the microphone. That ‘pop’ sound can be converted to a drum easily using the ‘Replace or Double Drum Track’ feature.

You could easily tap out an intense metal drum beat while your wife sleeps soundly in bed next to you… not that I’ve done that ;) 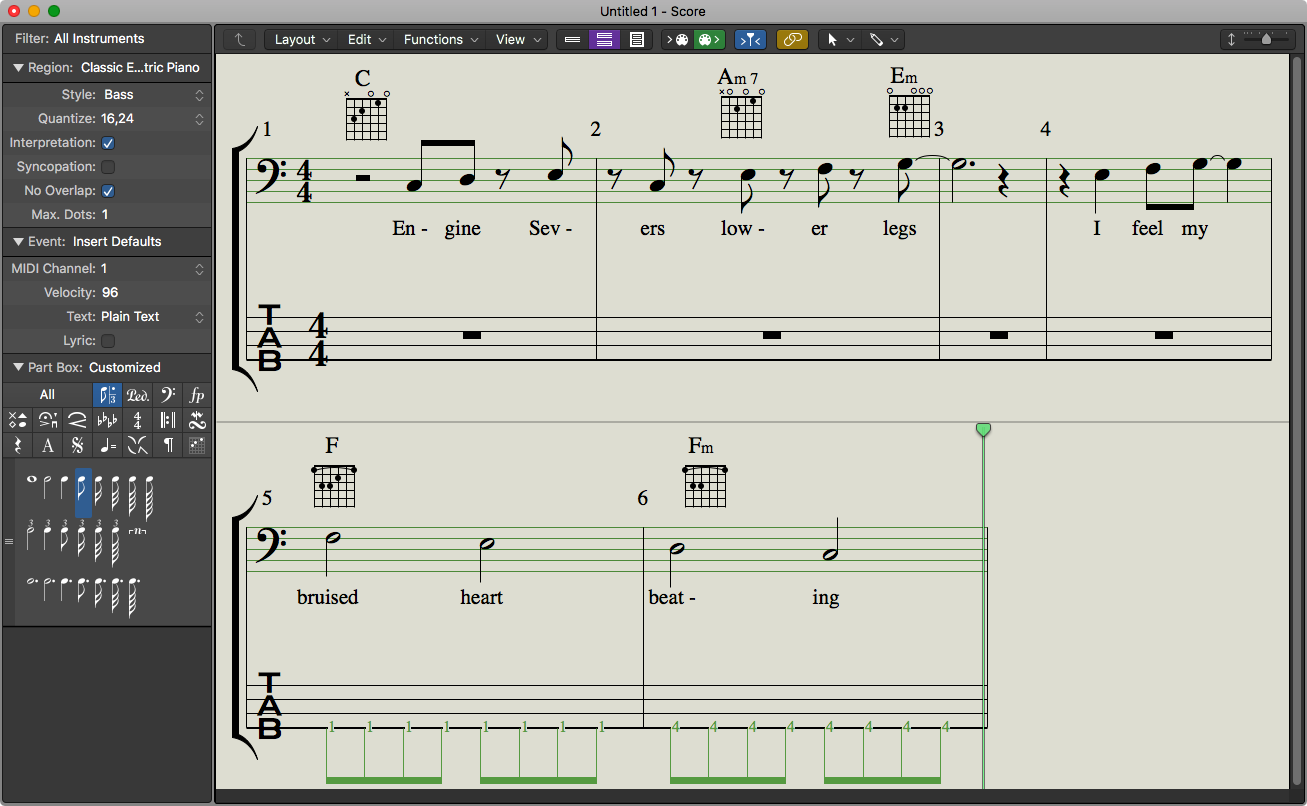 Let me get this out of the way: Yes other programs like Cubase have similar features. There’s a reason that I didn’t mention them in my previous reviews. They kinda suck.

It’s possible that you may not care about this, but if you are a guitarist then it makes it very easy to retain a record of the composition of a track. I personally like to maintain a chart of the arrangement of a project that I’m recording. It only takes a few minutes and can save you a lot of time in the future.

The example above took me 3 minutes to input a melody, chords, lyrics, a tabbed bass line and then format it. (I know that whole tie measure looks weird. I have no clue how to space that measure out correctly!)

Logic’s implementation of guitar-related scoring features is much nicer. There’s 2 main reasons for this… 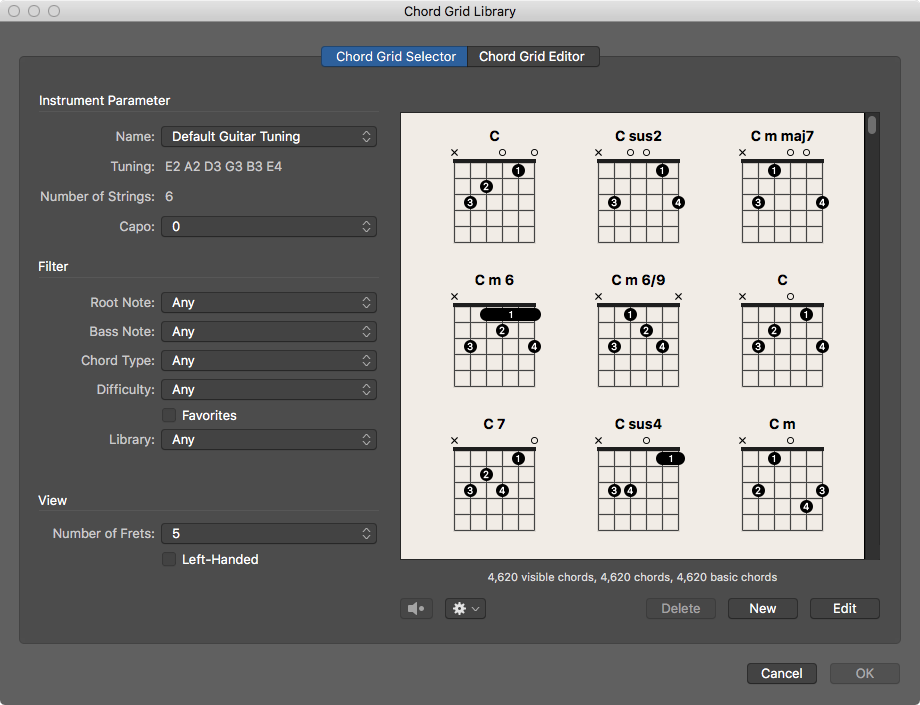 The guitar chord library makes it easy to select the correct chord to insert from a preset library. The options in the image above are fairly self-explanatory.

There is also a page where you can manually input frettings and name the chord appropriately. Inputting a chord only takes a few seconds at most, and finding the names of chords you may not be familiar with is simple. 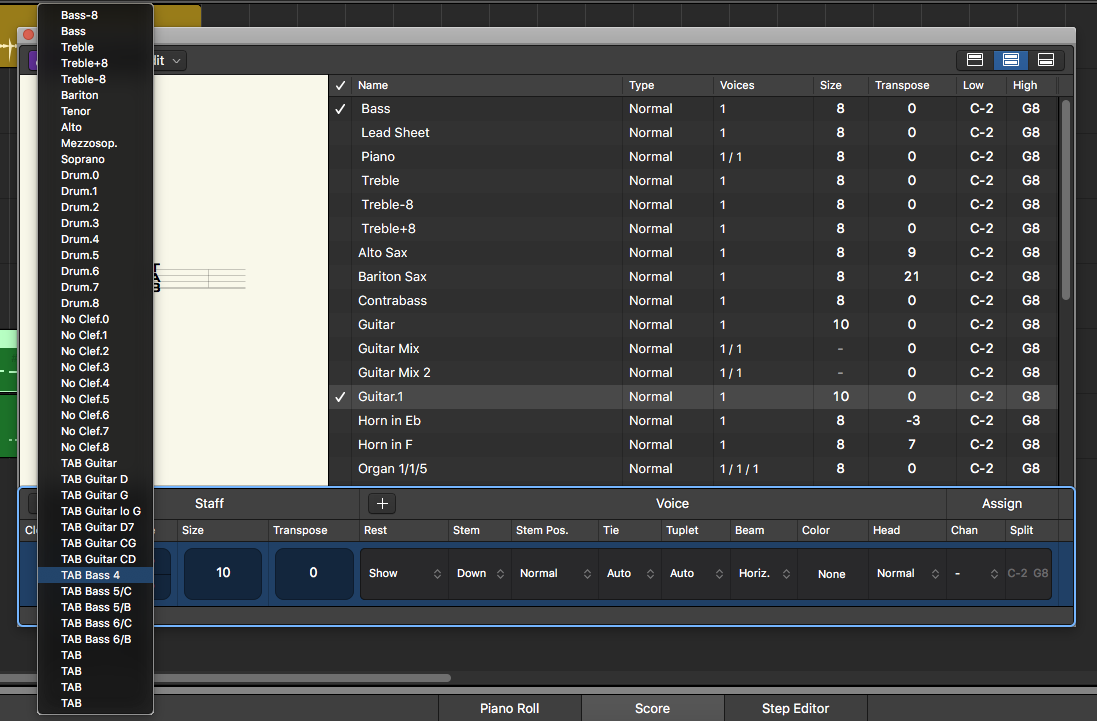 Staff styles allow you to adjust the staff as necessary to properly represent the music you are writing. In this particular case there’s a number of tablature styles available with excellent options for mapping the viewable tablature to the underlying MIDI data.

Compared to other integrated tab systems in other DAWs, Logic’s ability to manage staff styles gives you a nice selection of tablature and bass/guitar related options. 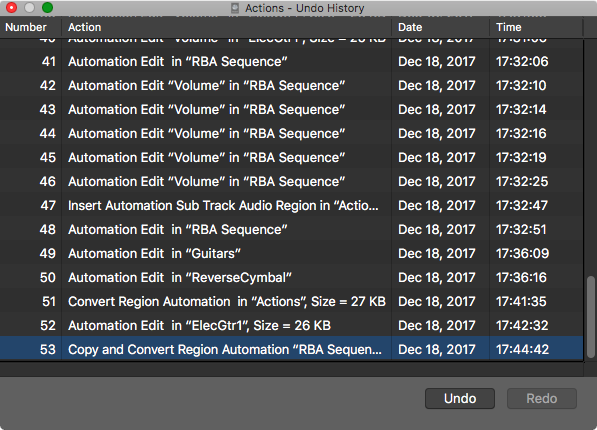 I’ve covered this before a few times, but until every DAW has it I’m going to consider it a feature worth mentioning.

If you close your project, save it, and re-open it in Logic Pro X then all of your undo data is retained. Worked on a project last week and realized the edits you made are off time? Open that project up and cmd-z a few times. Now you’re back to where you were when you hadn’t drank a few too many.

This is a simple feature that is missing in a lot of major DAWs, but it’s something that you really miss when it’s not there.

This post took 4 hours to research, screenshot, write and edit. If you appreciate the information presented then please consider joining patreon or donating!