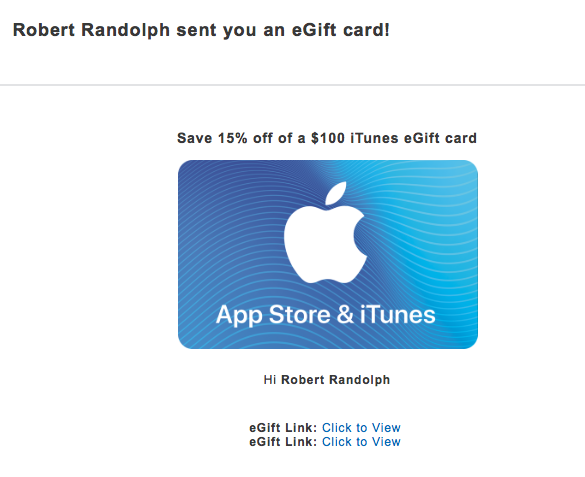 Save some money with one of these tips!

I’m trying to improve each successive review, so this one is taking more time than any previously. Of course, I also hope to update previous reviews soon… maybe. The Studio One reviews particularly need an update.

P.S. Huge shoutout to Edgar Rothermich, Eli Krantzberg, the aforementioned at Logic Pro expert and the staff at Logic Pro Help. Some of these tips come from their awesome resources. I also highly recommend Edgar’s Graphically Enhanced Manuals. I’ve gone through the free selection and they are awesome. These guys all are ‘Cool things’ about Logic.

Parts in this series:

When I purchased Logic, I paid $150 instead of the normal $199. How? Discounted gift cards.

This is completely legitimate, and I strongly suggest that you only buy from reputable retailers. You can simply google search for ‘itunes discount gift card’ or similar, or follow a twitter like this one https://twitter.com/itunescarddeals?lang=en. Sam’s club and Costco have frequent discounts assuming you have no ethical misgivings about purchasing from them.

I purchased 2 $100 gift cards for $75 each at kroger.com. I then used those 2 gift cards to purchase Logic outright. Easy savings.

Logic doesn’t officially support themes, but some folks have figured out clever ways of theming Logic. 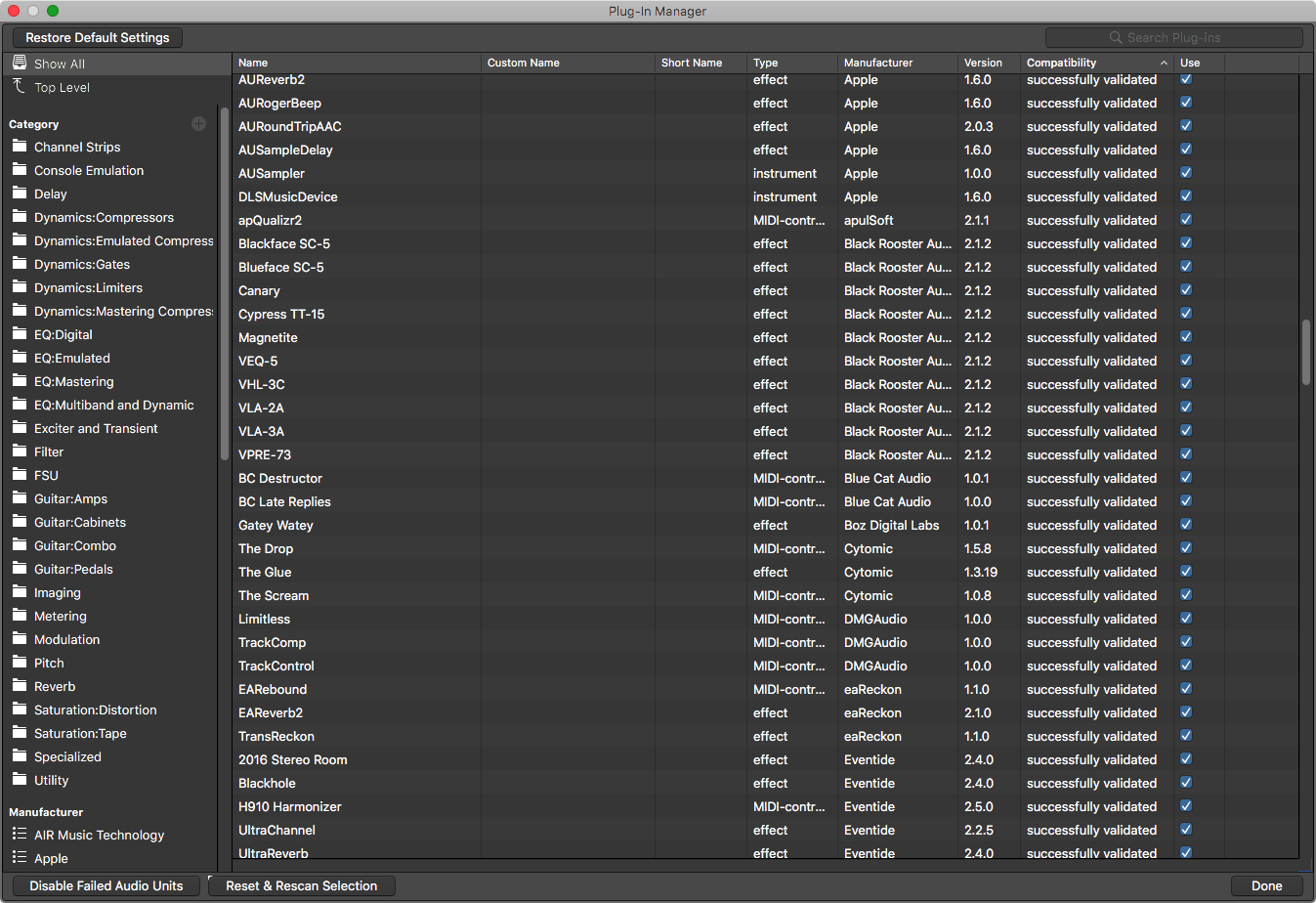 I already covered this one, but I’ll paste it here again.

Cubase and Reaper have an awesome feature that lets you see what plugins are not currently in a category. Logic does not have this… almost.

When I organized my plugins I simply took everything and dragged it to a folder I called ‘Uncategorized’. Then I simply dragged plugins from ‘Uncategorized’ to the correct folder. The net result being that anything that wasn’t in a properly labelled folder was left in the ‘Uncategorized’ folder and I can easily see what I missed.

Sometimes I amaze myself with the (admittedly somewhat small) amount of brain power I put towards such insignificant issues.

I’ll let you in on a secret: you can create sub-folders in Logic’s Plug-in Manager easily. A sub-folder is indicated by a colon :.

So Guitar is a folder, and Guitar:Pedals would create a sub-folder under Guitar with the name Pedals. Any level of sub-folder can contain effects. See my plug-in organizer screenshot above for this in action. (EQ, Dynamics, Guitar, Saturation)

Want even more power over your plugin organization? Go purchase the awesome Auganizer. Even with Logic Pro X’s new plug-in manager, Auganizer offers you a number of features that aid in the organizational process. Particularly with more advanced filtering, search and the fact that it works with all AU hosts.

If you want your Logic installs on 2 systems to be identical, including plugin manager settings and strips then you need to copy these 2 files:

You can get to these directories easily by opening Finder, Go->Go to Folder (cmd-shift-g) and typing the directory without the filename.

You can zoom in on an audio file in the ‘Editor’ in ‘File’ mode and use the pencil to draw on the waveform. This is useful for fixing minor pops and crackles.

The editor only draws on the left or right channel alone by default though. You can hold option and that will make the edit appear on both the left and right channels.

Logic has events called ‘Meta Events’. These are described in the manual, but it’s a very minor mention.

Basically these are internal controls for Logic. You can create events that triggers actions in Logic like jumping to a marker, switching a screenset, stopping playback, etc…

In the video above I have 2 meta events: Go To Marker and Stop Playback. If you watch the transport at the top you can see it jump from 2.1.1 straight to 6.1.1 (where the marker is). Then at 7.1.1 it stops where the marker is. Rather useful sometimes!

You may note that the playhead doesn’t follow the Go to Marker action. This appears to be a bug. 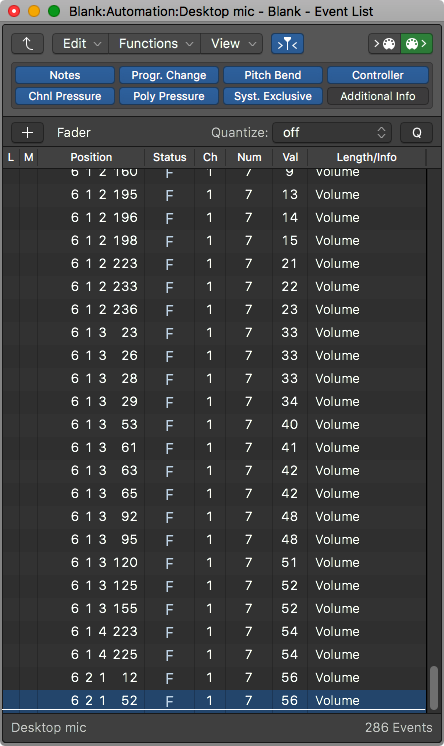 Logic has a hidden event list for fine-grained control of automation data. It’s not in a menu and it’s not a button. It’s only accessible via key-command. The default key is Command-Control-E, and it’s listed in the ‘Key Commands’ window under Track Automation Event List....

This window allows you to see every single automation event in a spreadsheet-like manner.

An interesting thing that I discovered is that you can insert midi data and meta events in your automation stream! What practical use this has, I’m not sure of yet, but it surely is something that could come in handy somehow maybe?

In another post I talked about the Drummer feature in Logic. I did not cover the bonus ‘Producer Kits’ that are available though.

Logic comes with a number of multi-track sampled drumkits that can be used with the Drummer or naturally with your own MIDI.

For using the ‘Producer Kits’ with a drummer (and assuming that you have the content installed), click the gear in the Drummer editor. It’s near ‘Beat Presets’ and select Keep settings when changing drummers. Now open the Library on the left (it’s the file folder looking icon in the upper left). Browse to Drum Kit->Producer Kits. Select one and go!

In your mixer now you’ll see a little triangle in the lower left of your track. You can click that and expand the multi-channel folder that allows you to access each element of the drum kit. Most of the ‘Producer Kits’ come with a selection of FX already in place, and you can add/remove/adjust those as you wish too.

Most of these actually sound quite decent too, especially for a free download with the software!

Logic’s Smart controls seem dopey at first, but they are far from it. You can assign any controls to one of the 8 available knobs. Multiple controls can be controlled by a single knob, and each mapped control can be scaled, inverted and has its own min/max range value! On top of all of that, smart controls can be automated too.

First some background. I have a plugin called BlackRooster VPR-73. It’s a pre-amp simulation that sounds amazing (go buy it!), but when you turn up the input gain it gets very loud. Naturally you would want to adjust the output gain in reverse to counteract that effect. VPR-73 has this capability built-in by right-dragging the ‘Gain’ knob but…

All of this is done with a single smart control. You can easily map up a control panel for your track that lets you adjust common effects, or make your own complex macros, all from an easy to access panel. 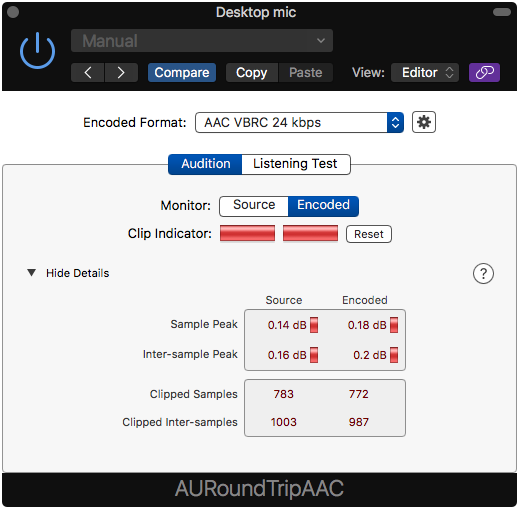 Ever wanted to know what your project would sound like encoded to various AAC formats? Well every modern apple system comes with the ‘AARoundTripAAC’ plugin. You can use it in any AudioUnits host like Logic. It’s located in Audio Units->Apple->AARoundTripAAC.

You can select which formats to preview in near-realtime and see information for clipping and intersample peaks.

This isn’t a Logic-specific feature, but as Logic user you are guaranteed to have this capability.

This post took 8 hours to research, photograph, write and edit. If you appreciate the information presented then please consider joining patreon or donating!