Automation in Studio One

Automation is an extremely important tool. In Studio One it’s even more important than some other DAWs since S1 does not have any modulation capabilities; automation is the only way to move controls around ‘automatically’.

Studio One excels largely in editing and ‘penning in’ automation, but is seriously lacking in some areas. Let’s investigate

Writing with a controller

Assigning midi to a control 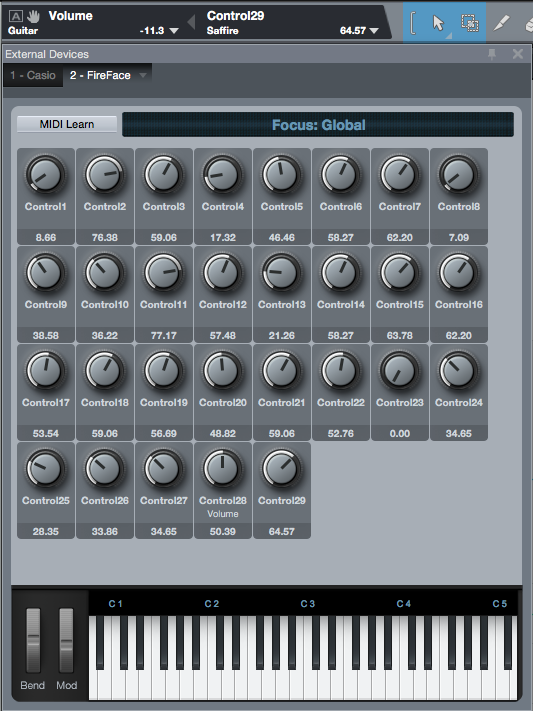 Assigning a midi controller to a specific in-daw control is not difficult, but could be improved.

First you have to open your external devices window (the rightmost down pointing arrow in the upper section of the picture), move the controllers you want to map to have them available.

Then in the DAW, you move the thing you want to map and then what you want to map it to. Both of these will show in the upper left. Press the left-facing triangle in the middle and they are now mapped.

I’ve seen better, I’ve seen worse. The most bothersome thing is that you apparently can’t map NRPN, Sysex, notes, velocity, pitch bend etc… Only midi CC. For me the exclusivity of CC control is a damning oversight that makes this feature very frustrating for me.

Nothing here to see folks! It really sucks, confining automation changes appears to be only doable by hand.

Well, it does what you’d expect, but with no density or thinning controls.

There are a few basic shapes you can add: Sine, Saw, Square, Triangle and Parabola. You can change the phase offset, frequency and DC offset of these shapes.

There’s no way to adjust the automation density, change the slope of the parabola or to manually enter a frequency for the shapes. Fine control of frequency is only attained through the grid settings.

It is a bit weird that the manual calls them ‘Figures’. Doesn’t exactly make searching for this easy.

A weird issue with it is that once you draw the transform box, it seems rather difficult to get rid of it!

Trimming manually works as expected. Select points or space between points and hover your mouse at the top of the lane/track till you see the horizontal trim cursor. Good enough.

You can edit the literal value of an automation point by right clicking on it. Unfortunately you can not change the location of the value here. Unfortunate, as that would be extremely useful.

The only way to add automation to a currently existing automation is to create a VCA, make your secondary automation, then merge it. Some other DAWs allow you to directly add/subtract automation as you write it, which is an exceptionally useful feature.

Studio One only comes with the basic automation modes: Off, Read, Touch, Latch and Write.

Other DAWs have all sorts of features for adjusting how and when automation is written. S1 only contains what I’ve listed here and nothing else. DAW automation has really advanced in the last 10 years with all sorts of excellent ways to handle complex workflows for film, large audio projects and crazy electronic production. Studio One is about a decade in the past here.

So apparently S1 has a feature called ‘Instrument Part Automation’. How exactly this is helpful, I’ve yet to figure out.

I actually can’t figure out why this is useful because nowhere else in the manual does the term ‘Instrument Part’ appear. I don’t know what an instrument part is or why having automation part of it is important.

S1 automatically attaches automation to audio regions, so that’s not it… I think. Instrument tracks have all the same modes as audio tracks, so there’s nothing special there either. My best guess is that this simply allows you to edit automation for an instrument in the ‘editor’ for the midi region.

I’m actually really confused by this, and once again the Studio One fails to actually explain this.

Automation tracks are simply tracks that only contain automation. They can have automation for basically any controls in the mixer which is largely where they become useful.

Things like busses and VCAs don’t display in the main view, so they don’t have an obvious way of editing automation. Automation tracks allow you to essentially put those ‘mixer-only’ entities in to your main view.

They are also quite useful for decontextualizing large ‘song wide’ changes from the instruments themselves. If you have a crescendo that affects a number of tracks, you could easily group all the automation specific to that crescendo in to an automation track. Since it can contain automation from all over, you can have a single track that contains the automation for a single ‘idea’. Very useful.

Mostly, Studio One has the bare basic automation features that you’d expect from a DAW back in 1998. The transform tool is useful (but not unique), and that’s about it.

This is not really where S1 shines at all. VCA Faders really help out for day to day work, but when you really want to dig in to more advanced automation workflows, S1 is a total disappointment.