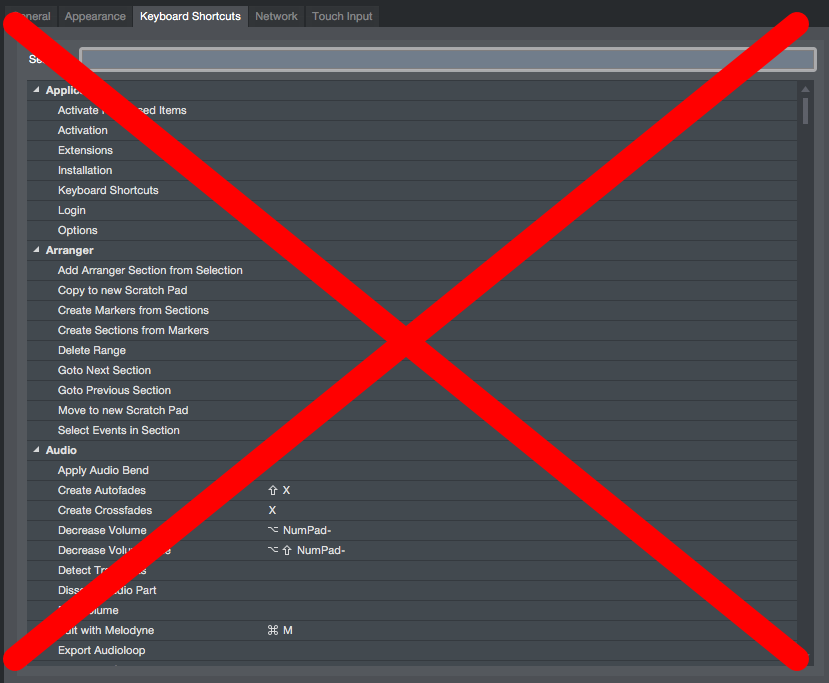 My 1 month (total) venture with Studio One 3 has come to a close. I didn’t write about some basics such as audio editing and midi editing, but I certainly did experience them.

Studio One 3 is not my preference. There’s a variety of reasons, but for me it comes down to 2 main things.

Let me explain why these are an issue for me, and relay my overall experience (the poison).

I think drag and drop is awful. Studio One attempts to use it for nearly every operation, and I feel that this is a huge mistake. The drag and drop paradigm violates a few basic principles that are inherent to using a mouse to control an onscreen cursor.

When you drag and drop there is downward pressure on the mouse. This pressure increases friction. The pressure is also problematic when the pressure does not occur perfectly perpendicular to the surface that the mouse is resting on. Waywards pressure will cause the mouse to veer slightly in the direction of that pressure without the explicit intent of the user.

The act of holding a mouse button down increases tension in the hand and forearm. When pressure veers slightly off perpendicular to the mousing surface, users usually also grip the mouse by the sides more firmly to compensate.

Since most mice are dome shaped, pressing a mouse button will always cause non-perpendicular pressure on the vertical axis of cursor movement. The balance between pressing down, even lightly, and managing tension in the fingers and arm to compensate creates an unnecessarily complex balancing act between multiple tensed muscle groups.

It conflates the beginning of an action and the end.

The act of dragging and dropping creates an unnecessary link between the selection of something and its destination or action. The entire pathway from selection to finishing the action is linked and thusly error-prone for the entire process.

Errors then require that you: undo, visually identify the object, move the cursor to the object, select it and repeat the process that caused the error to begin with.

Compare this to a select->action system, even one as annoying as a menu-based system. The selection can be persistent and the action requires no visual re-acquisition. The target action is fixed and not reliant on muscle-memory or physical dexterity.

Studio One appears to be well-geared towards laying down rough ideas, but the process of refining what’s been placed is rather poor in my experience. The lack of keyboard shortcuts relative to other DAWs, and the reliance on drag and drop, makes it very difficult to refine your workflow.

This is a very subjective thing, but it’s also rather objective.

I have projects that I call ‘Dailies’. This is when I just open up my DAW and screw around. Maybe I’ll load up a song and practice with it then evaluate my practice and see how I’m progressing. Maybe I’ll write a short song, or a short part to a song. I’ll do all sorts of random little things.

My dailies in S1 have been exceptionally short, and for the first time in ~2 years I ended up totally skipping some days due to lack of desire.

I feel this is because of the frustrations I’ve had with Studio One that caused me to fear having an annoying problem once I’m in a creative flow. Crashes were a fear, arm cramping was a fear, having to consult the awful manual was a fear, realizing a feature didn’t exist (nrpn! certain editing commands, looping, etc..) that I rely on heavily, and a few other things that popped up over time.

Overall I not only didn’t enjoy using Studio One, but I grew to dread it.

Overall I have not been satisfied with Studio One. There are some cool effects included, Mai Tai is fantastic and the basic capabilities are there. They also have included some relatively unique things with scratch pad and the Song window.

My main issues come from my complaints above and the instability that I’ve experienced. If you read this blog you’ll know that I had to abandon my first try with S1 because of constant crashing. A single crash isn’t even acceptable! I’ve had a few which even includes two that corrupted my project file.

I hope that Studio One progresses over time and begins to include a lot of the more ‘mature’ feature sets. For now it’s an excellent DAW for someone doing relatively simple work and looking to avoid using any of the other major players for some reason.

If you are already a user of another DAW like Cubase/Nuendo, Logic, Digital Performer, Reaper or perhaps even FLStudio, and you have anything remotely close to a complex or well-refined workflow then you will very likely be unsatisfied with Studio One.

If Studio One existed 10 years ago and I sat down with it in this current state I would be pretty amazed. However, half-way through 2016 it is simply not that impressive compared to other options unless you are doing relatively basic things.

Not everyone needs to do crazy stuff though. A large portion of music is made with ‘just the basics’. It’s not a scarlet mark to have a basic workflow. Studio One will likely fit the bill for a large number of people because of this.

It’s just not for me, and probably won’t be for many years to come.

«  Studio One crashing.. Trying out Cubase 8.5 »
If you appreciate the information presented then please consider joining patreon or donating money/time