The problem with drum torque wrenches 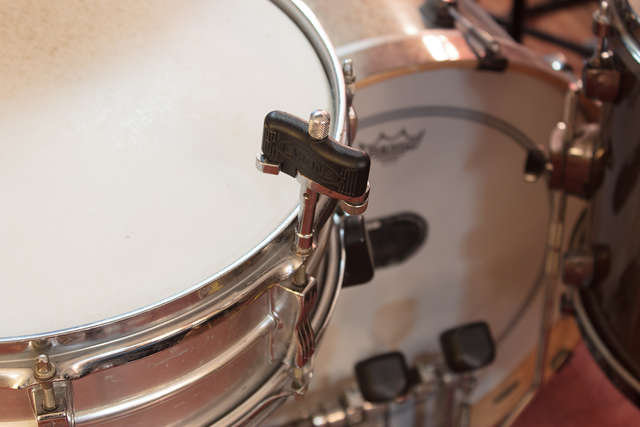 I have an Evans Torque Key that I’ve been testing for a couple months for attempting to quickly maintain drum tuning. While the actual product itself is great, the concept that it is based on is fundamentally flawed.

I’m going to cover both the product and the issues that underlie its failure as a product.

The Evans Torque Key is a very simple product. 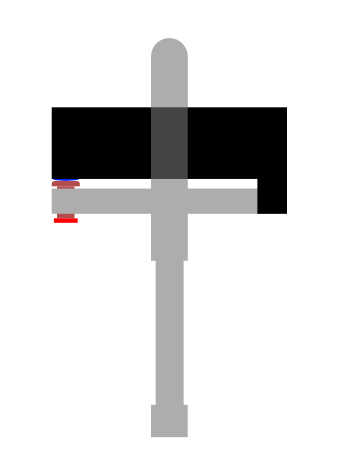 To use the wrench, you simply place the wrench on the tuning rod and turn while only holding the black part.

The red section is a screw going through the silver. The screw terminates in a hardened bushing. The blue part is a bearing that is fixed in to the black.

While in the neutral position, as you tighten the red screw, it causes the bearing to be set in to the bushing. This creates friction when attempting to turn the black part. As you hold the black portion and turn, eventually the torque of the tuning rod will overcome the friction of the bearing-bushing (red/blue) joint and they will separate.

Since you can adjust the amount of force between the bearing-bushing joint by adjusting the red screw, you can control how much torque occurs before that joint breaks. The bottom of the red screw has numbering and an index, and the turning is detented. This allows you to set torque values relatively accurately.

To work on another tuning rod, you must manually snap the bearing-bushing joint back together and repeat the process.

The Evans Torque Key as a product itself is wonderful. The torque values are repeatable in ideal circumstances (this is important!). It’s solidly built and will take a severe beating.

As a simple drum key it is an improvement over what most drummers seem to use. The handle is large. The socket fits various tuning rod types from vintage to modern drums. There is a knurled top that allows you to correctly set your drums to finger tight (never use your fingers for this!). Mine appears to have a magnetic insert which is very handy.

Outside of the flawed premise of the product, there is another issue. Even though there’s 4 ‘clicks’ between values, on something like a 10” drum, each click (0.25 of a whole number on the dial) is more than a single whole tone at some points. For instance it’s impossible to go from a low G# to an A on my 12” rack tom using the torque wrench. Using the absolute ideal procedure (that I outline later), will all rods equally torqued the head sounds from a G# at click 3 to a slightly sharp A3 at click 3.25. That kinda sucks. There’s no way to access interim values and you’re basically stuck with that.

Since pitch values are exponential, it also requires an exponential amount of torque (divided by the rods used) to move between values. The torque wrench values are linearly mapped though. That means that while 3.0-3.25 jumps over a whole tone, 9-10 only changes the drum by a few cents! There’s no good way to intuitively process what is about to happen to the drum based upon the dial values.

As a product, if using torque to tune drums was a reasonable proposition, this would be a decent option.

The problem to start

Using torque as a measurement for fasteners works quite well. However, this presupposes that you have a few things (more than I will list in fact): linear friction on the thread, relatively non-elastic mating surfaces, a consideration for fastener failure and the desired preload. With drums, you have none of these things.

The problem in action.

In the above image we have a picture of a potential example of a well-tuned drum. Each point of tension across the hoop has the head at an even amount of tension. The rim of the head is parallel to the bearing edge of the drum, and each tuning rod is equally torqued.

This will almost never happen for a variety of reasons:

Let’s take a look at this drum now.

This is a drum with all tuning rods having an equal amount of torque applied. The problem being that one single tuning rod (D) was brought to a given torque first. The torque was achieved by the uneven deformation of the head and the lever action of A/B. (With C being something like a fulcrum and B offering a stop, unless C isn’t sufficiently low, then C is the stop. Or if B and C are sufficiently high, then A will be brought to a given torque without ever turning it!)

This set of problems is compounded by the type of hoop used.

The previous section was a pretty radical example. Even though it’s only a 1° bend across the entire drum, it’s extreme.

However, even a very minor difference in initial torque will propagate through the head as the drum is tuned. It’s very easy to experience this yourself. Simply take a drum, record it. Have a friend randomly detune all but 1 tuning rod. Attempt to retune the drum to the exact same sound across the head without touching that single un-touched tuning rod. Have fun. No really… have fun.

Hey you dick. You cut me off..

Sure. You can tune a drum very well with a torque wrench.

All you have to do is

Easy? I guess? The whole time you are required to check the assembly by eye and by ear. If you’re already checking by ear, aren’t you just tuning the drum like we have for 1000s of years already?

That’s not all though! When you want to touch-up a drum, you have to carefully make sure:

Then maybe you can just tweak that rod or two to a specific torque value. Maybe. Go with the previous example. Take a well-tuned, but used, drum that has all but 1 (or even 2) rods detuned randomly and see if you can bring it back to its previous state with a torque wrench. It’s not possible.

Torque wrenches for drums are cool ideas. Unfortunately, torque is a red herring when it comes to tuning drums. It’s possible to have perfect torque values on every tuning rod and an awful sounding drum. Likewise (as most drummers know), it’s possible to have wildly different torque values across the tuning rods and have an amazing sounding drum. In fact, it’s common.

Torque wrenches for drums just give an illusion of ‘sound recall’. If we could guarantee a number of variables at a specific state, the wrenches could live up to this promise. We can not make those guarantees. At best we can carefully monitor the process as we tune the drum, but at that point we are simply going through the common tuning process and no longer require the specialized tuning wrench.

That’s not to say that all drum tuning devices and aides are rubbish. There’s some out there based on sound science that are definitely worth considering. Maybe we’ll cover that again another time ;)