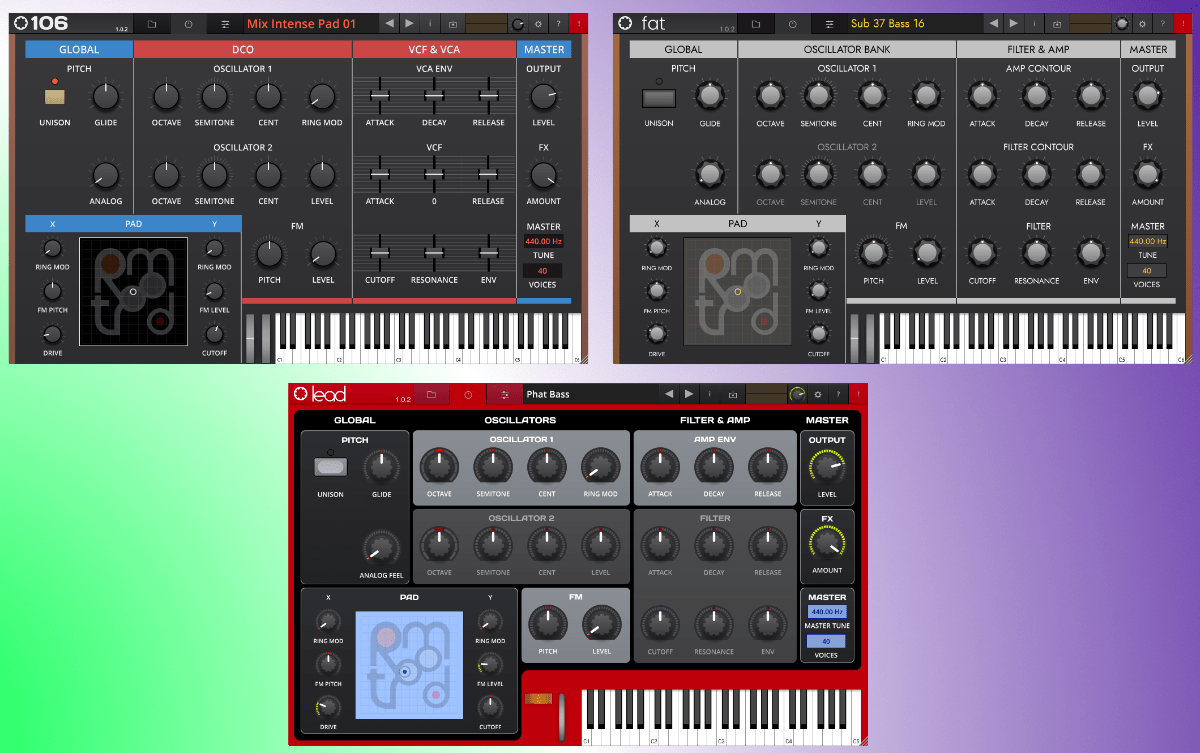 I’m going to be taking a look at The Retromod series from Tracktion Corporation.

I did not pay for these products. I was given an NFR (not-for-resale) copy for review. I try my best to not let this affect my opinions. If you feel like I did, then please say so in the comments.

Retromod takes on the task of getting more vintage sounds, so let’s see what they came up with.

ALSO Video review is available too!

They are Romplers. There’s audio data that’s stored (content that you download) and then played back. The difference between this and a sampler is that you can’t edit the audio data.

This audio is passed through a series of pitch controls, filters, effects, etc.. before you ultimately hear it.

I’ve noticed that a decent number of people dislike romplers for some reason, however I feel that is an unfounded dislike. While these aren’t intense analog emulations, I think you’ll find that it’s totally irrelevant when hearing the output.

I am not 100% certain, but it appears that presets are detailed samplings of the synths that are played back through the common engines. 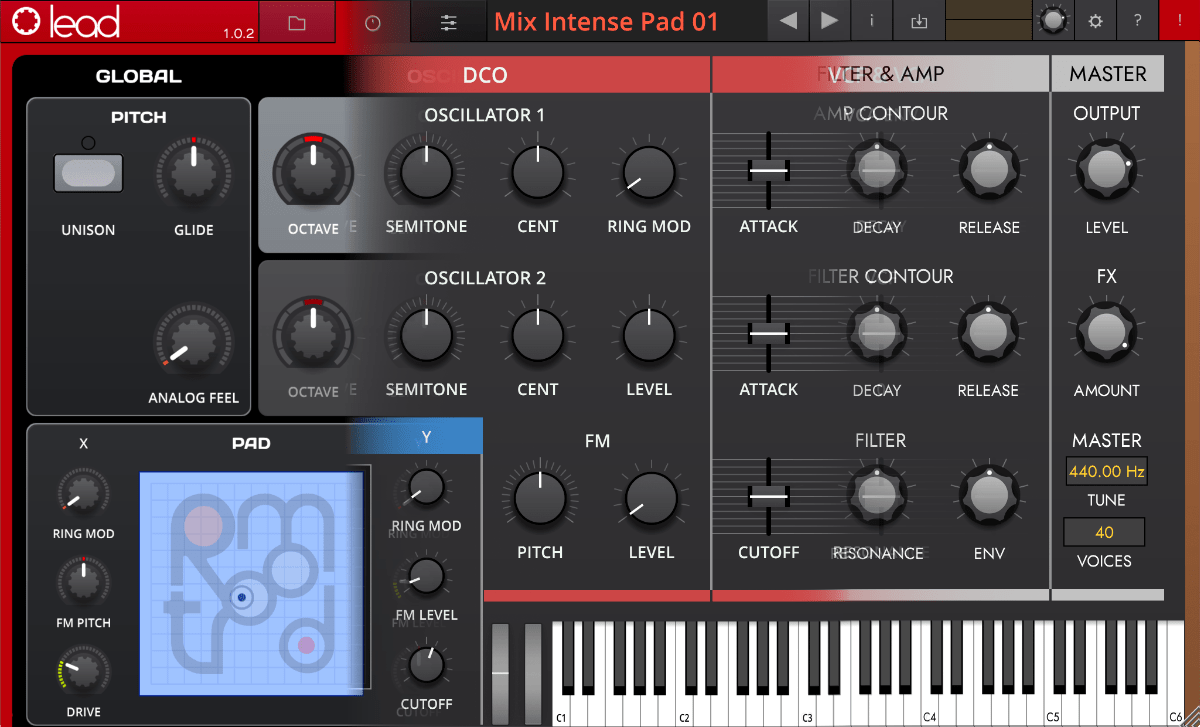 This image took me too long to make

Given that all three of these products are based on the same engine, they have a number of parameters in common:

The effects are surprisingly useful. The compressor works well and is a valuable asset when trying to make aggressive leads that sit nicely in the mix.

The phaser, chorus and delays are a bit mediocre in their capability. The chorus and phaser work well for creating subtle or crazy stereo effects, but for trying to add a small bit of interest to the sound it’s a bit of a struggle. I think this is due to the knob throws, where it encourages more audible effects.

The XY pad has a somewhat mysterious ‘Drive’ control that’s not available elsewhere on the GUI. The only place that you can access it is the XY pad. It does not appear to be linkde to the distortion effect in the effects panel. 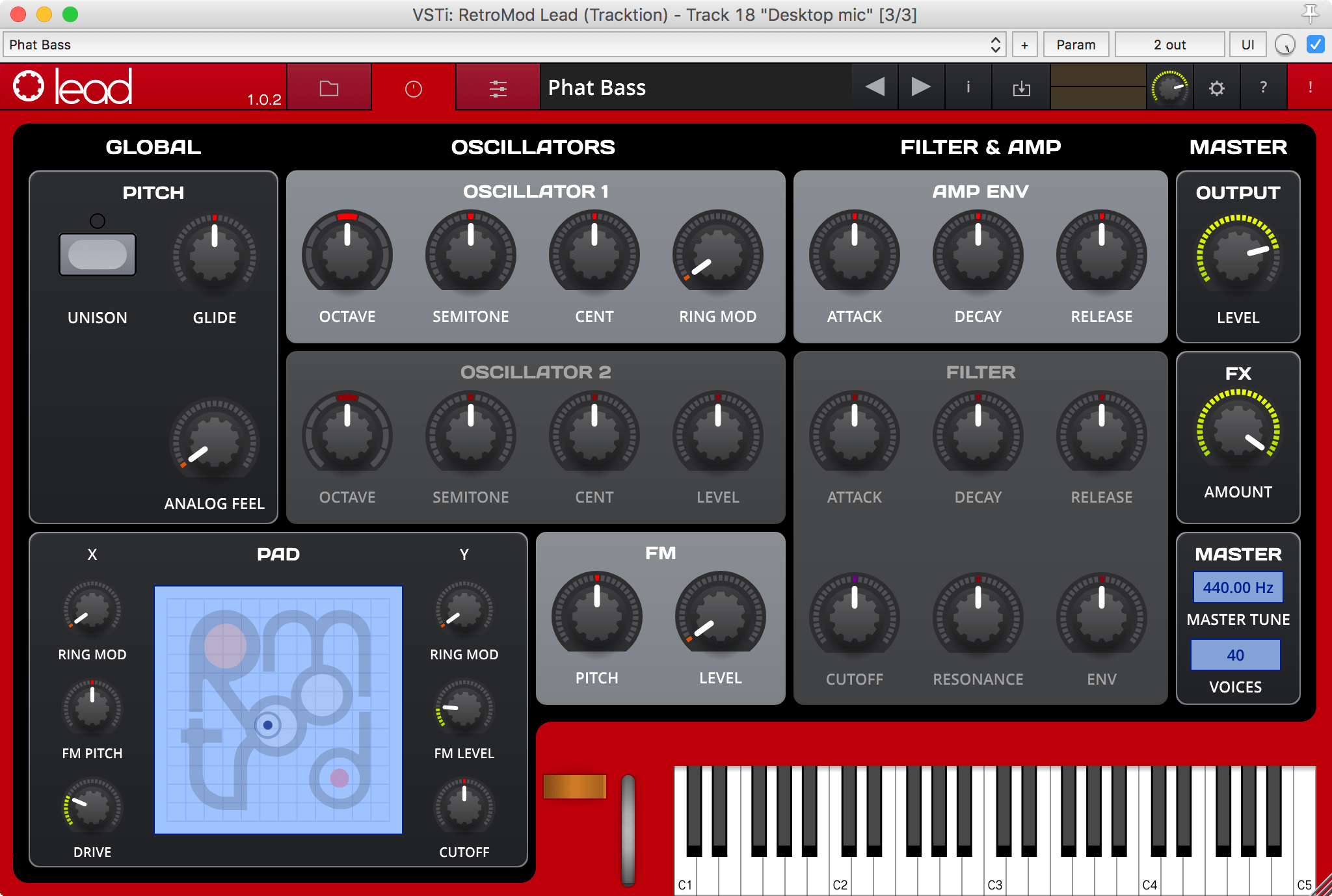 Unlike the brothers in the Retromod series, the presets labeled here don’t give away what synth is being used for the sound. It’s a somewhat strange departure from labeling via synth names to vague preset names.

Despite the naming, you’re in for a treat here if you want that digital synth sound. Those EDM festival leads, wide evolving pads, soft velvety key sounds and gritty FM sounds are here. The 90’s and 00’s digital dance revolution is here. The base sounds for the Nord series which influenced the creation of modern synth based dance music are presented fully here, and not just leads but pads and those squirrely basses too.

Retromod Lead plays the most nicely with the included effects. The delay and chorus feel about right for the quality of sounds. The distortion sounds similar to what you’d hear with these synths ~20 years ago, largely because people were feeding them in to external pedals anyway.

It gets the basic sound just right.

The drum section is a bit of a letdown though. There’s only 15 kits. 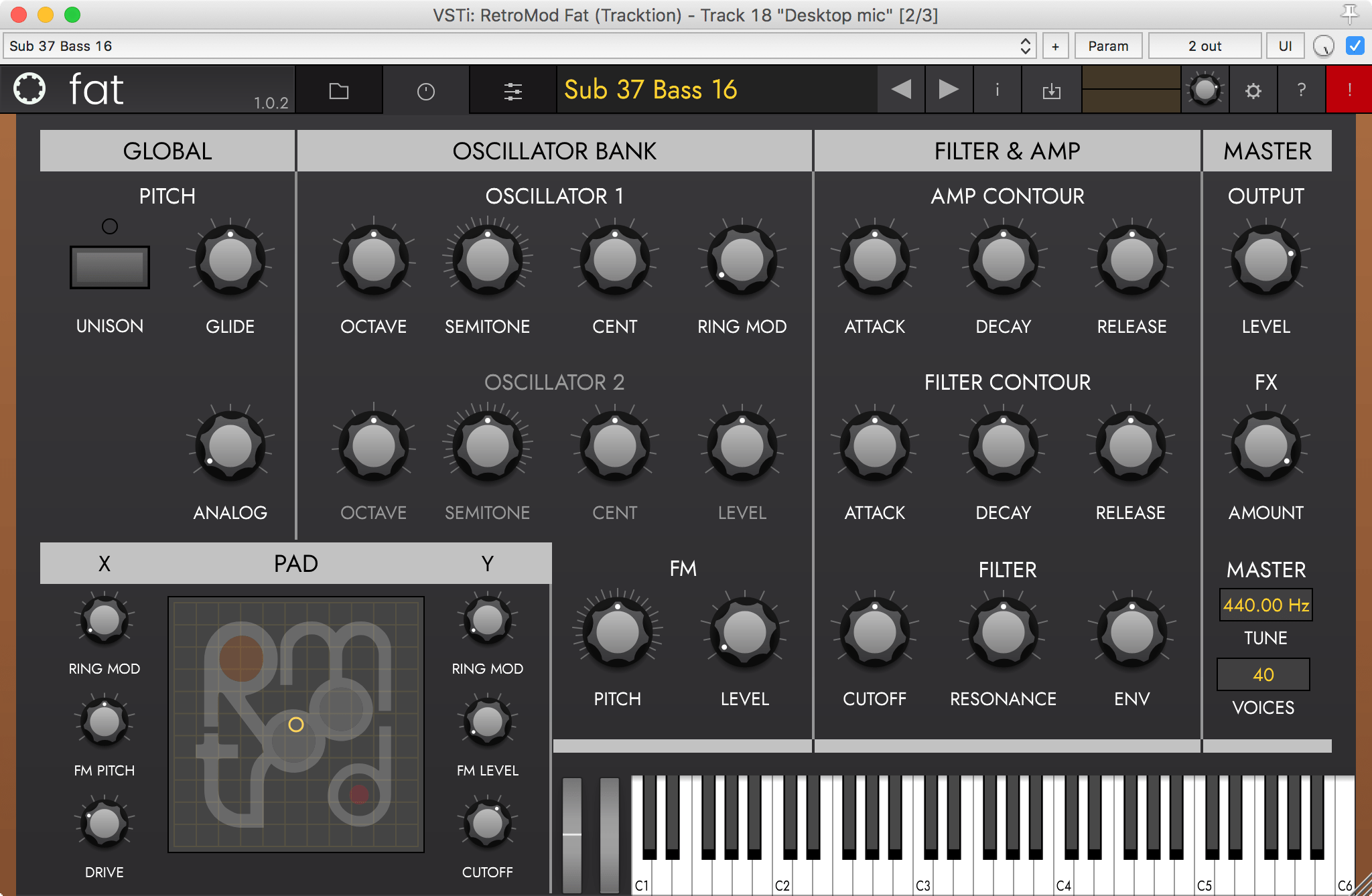 The Voyager presets are entirely disappointing. They all sound thin and lack any sort of grit that the Voyager is capable of. The bass presets have the EQ set with +12db bass boosts(?!?!?). Many of the Voyager samples have ridiculously aggressive EQ settings and still manage to sound anemic. There’s only 5 lead presets, which all sound like default presets on a VSTi. The ‘Synth’ presets aren’t too bad, but once again they default with 6-12db EQ boosts.

The Sub 37 presets are slightly disappointing to me. The sub 37 is capable of some really deep basses and aggressive leads. None of these are presented here, and the frontend controls don’t give you the same feel as the hardware. The presets do sound good on their own however, but with the intention of evoking a feeling of the Sub 37 it’s a let down.

I suspect that if the names of Moog synths were not on here, I’d be mostly impressed with the sound. Retromod Fat presents some clean synth sounds that, when you turn the EQ off, offer a great starting point to build upon.

When the Moog monikers are tacked on, it’s a lackluster experience. That grit, the screeching squelchy bits and warm overdrive isn’t there. I also object to calling this ‘Fat’. The 106 retromod has more ‘fat’ synth sounds, and more of them are deep and aggressive.

If you want some clean analog-like base synth sounds to work from, then this is a great product. If you really want stereotypical Moog sounds then I would look elsewhere. 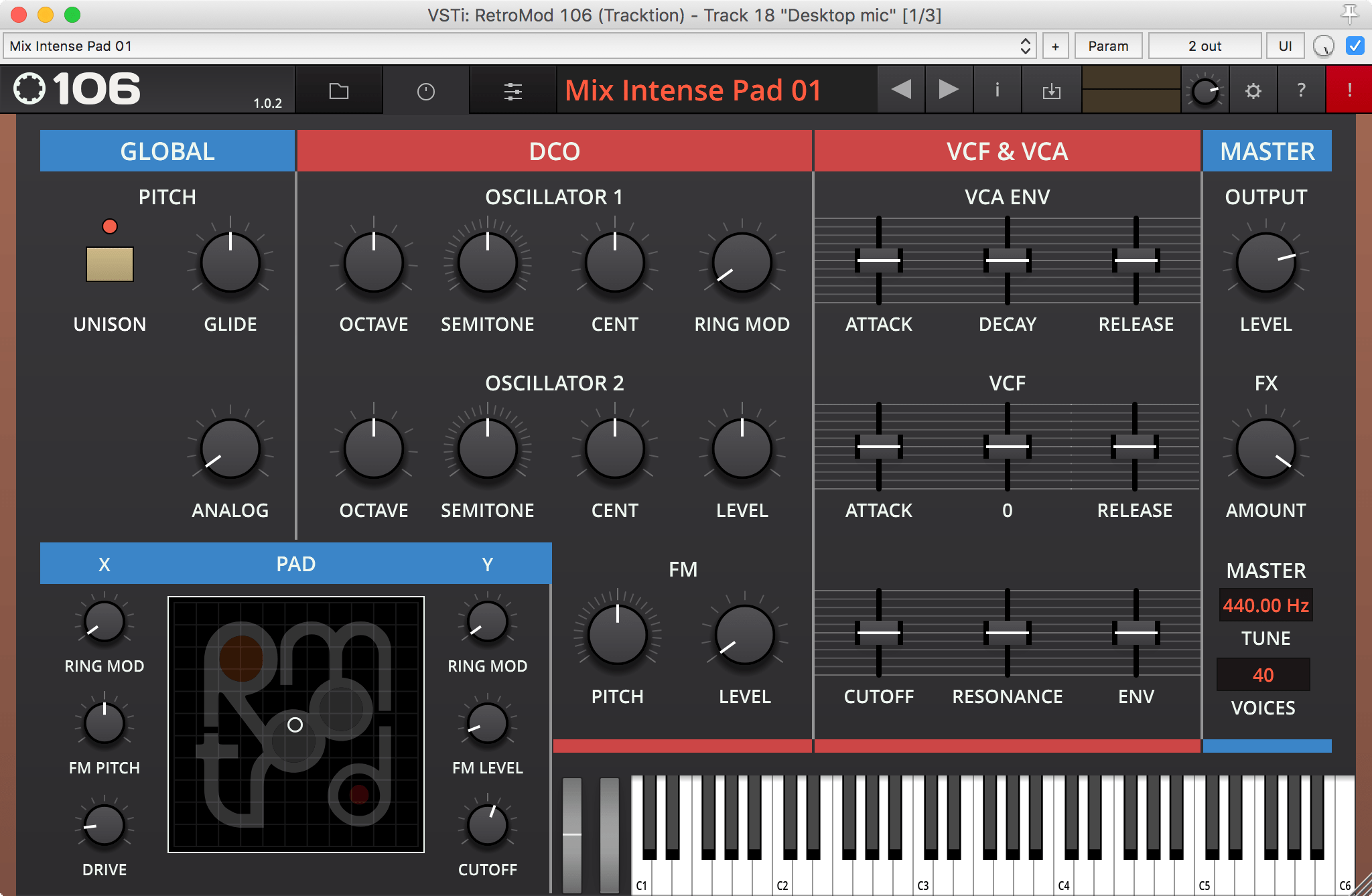 Here we have a variety of presets aiming to mimic the sound of the Alpha Juno, Juno 60, and Juno 106.

This is my bread and butter right here. I have an Alpha Juno and a 106, and I used to have a Juno 60. The Alpha Juno 1 was my first synthesizer, new, and I have used that thing for 1000s of hours.

The sounds all feel very hi-fi, but the feel is there. Particularly the 106 basses have that Roland bass feel to them, but without the grit (which you can add yourself).

The filter on the front page sadly just doesn’t do it though. If you want a Juno-Like filter feel then you are going to have trouble. As far as I can tell the supplied filter doesn’t appear to emulate a Juno-style filter at all. It certainly does not behave similarly.

I know, I know. It sounds like I’m being awfully negative…. because I am.

These are a trio of good sounding synths, but they are deceptive. They don’t offer you the experience that you may crave if you’re at all used to any of the named synths. If you want a classic Juno filter feel or that gritty overdriven Nord Lead 2 sound then you won’t get it.

If you find a sound that you like and you want to tweak it just a bit, then you’re out of luck. You can adjust an oscillator, use a non-authentic filter or add some effects. Meh. I feel somewhat insulted with products like this where it feels like I’m being sold something, such as the experience of a Moog product line, but what is delivered is basically a recording of the sound.

Now if the Moog or Clavia or Roland name wasn’t attached to this rompler at all, then I’d have likely given it a very different review. I enjoy the sounds that come out of it. On their own merit they are interesting, but when the marketing starts putting out the big names then I’m going to expect that experience.

You do not get that experience. You get some meek samples of some synths that built their name on the extremes of their functionality. These samples are cool, especially some of the bass presets, but they don’t live up to the marketing hype.

DESPITE THIS I quite like using Retromod, especially 106. It offers quick access to a slice of some familiar sounds. Are they authentic? No. Do they offer the experience of using that synth? No. Are they great for quickly grabbing a sound to use where nobody cares what synth you used? YES.

I still must temper this with my opinion that I feel that the marketing is slightly deceptive. They do make it clear that it’s a sampled product, but there’s also a subtext that you’ll get something resembling an authentic experience, which you will not get.

But you do get a good sounding product at a fair price.

This post took 18 hours to research, photograph, screencast, write and edit. If you appreciate the information presented then please consider joining patreon or donating!