Digital Performer 10 is out! and one of the big features is VCA faders. Other DAWs have had them for a while, but I love DP and it’s now time to talk about VCA Faders in more detail.

What are VCA faders and why do they matter? Allow me a few minutes to explain.

NOTE: DAW Chart has been updated for DP10! Look at those points soar!

There are 4 places where VCA faders win out over other options. Both of these advantages overlap each other for a semi-tertiary benefit.

Imagine you have a song. (I know that’s hard for some of you). You’ve automated it to perfection… almost.

The synth pads in the chorus are a bit loud, but only in sections. You want to automate a whole section of the mix, on top of the existing faders. Excellent! VCA Faders to the rescue.

Select the tracks, Project->Add Tracks->VCA Track And Group. Now you have a shiny new VCA fader that allows you to adjust the connect faders, and automate them as you will. VCA tracks do not process audio, they only multiply the current child fader value by the VCA fader value.

Regarding automation, VCAs in Digital Performer have a pro/con that’s worth considering.

Imagine two tracks with audio peaking at -6dB FS. One is controlled by a chain of VCAs. One is output to a chain of Aux groups.

If you turn the VCA up, the child track will never go above +6dB. It doesn’t matter how many VCAs are stacked and trying to control it. Thusly the child tracks output would never clip in this scenario, since it can not go above +6dB boost no matter what the VCA does.

The aux group can stack gain upon gain until the output is clipping.

It should be fairly obvious how this can be a great thing, or a terrible thing, but it’s a thing. Consider it and use it to your benefit.

If you read the Automation section then you surely thought, “Hey dude, I can just send all my tracks to an Aux Group and automate that!”

You’re right, you can.

Unless you have any aux sends, then you’re in trouble.

Look at the graph above. With an Aux group, what happens to your send when you turn down your Aux group?

With a VCA, it’s identical to moving the faders themselves. Turn the VCA fader down, and your sends also come down proportionally.

That graph above is going to seem overwhelming at first for some people. Let me lay out a few things here:

Now look at the VCAs and see what they control. Some tracks are controlled by multiple VCAs. Some VCAs are nested. Setting up your project like this with groups would be a nightmare.

VCAs make it easy, and they also help you ‘conceptualize’ the mixing process. As you start tracing the various lines it’s possible that you begin to think of what this theoretical song sounds like. Those conceptual units map directly to faders, and those faders don’t mess up your sends or your automation.

You can mix by instrument, section, part of the track, conceptual unit or whatever you can think of! Then you can chain those ideas and use automation and sends without pulling your hair out.

You can’t do that with aux groups or fader groups and stay sane. 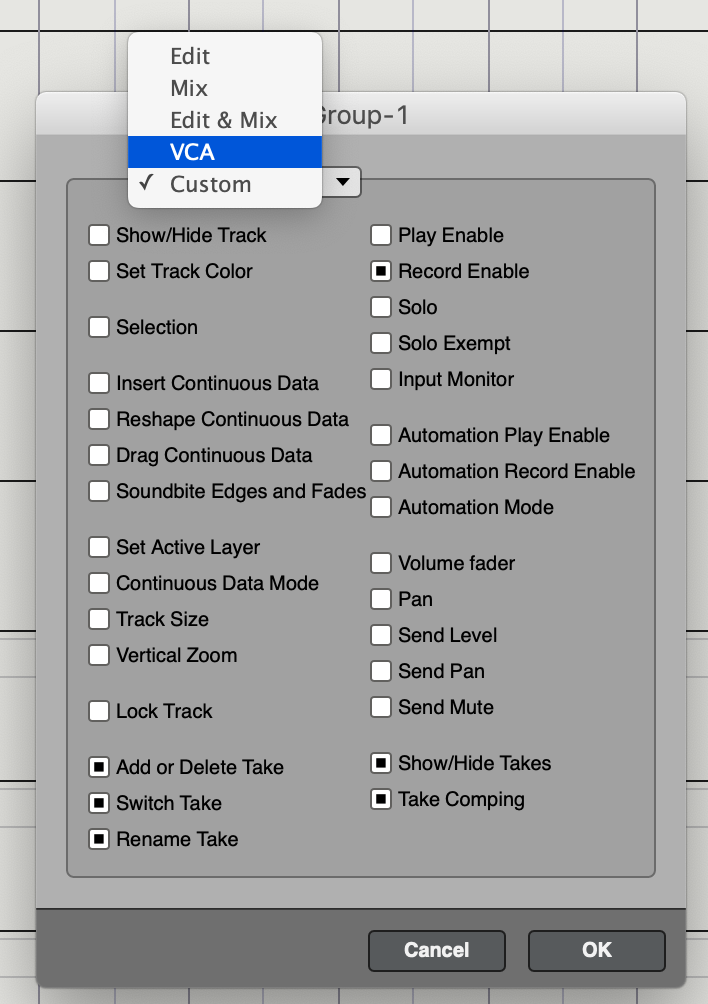 By “Fader Group” I mean when you link multiple faders together so they act as a cohesive unit.

VCAs are awesome. If you are a regular reader then you know how much I love them. DP 10 has them now, and I’m incredibly happy about that.

Hopefully this article has helped you share my excitement, and my love of VCA Fader Groups.

This post took 17 hours to screenshot, screencap, write and edit. The video took me 8 hours. If you appreciate the information presented then please consider joining patreon or paying me for my time spent bringing you quality content!