How this site works - The technologies behind it 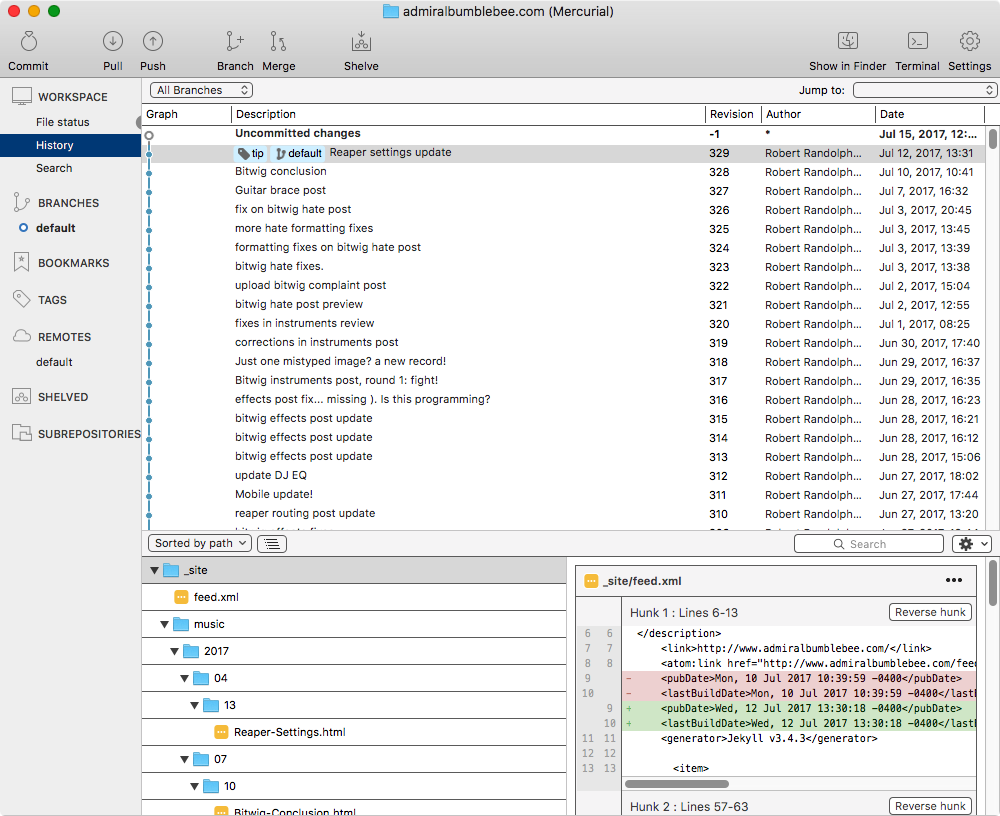 I’ve received some questions over time about how I blog. What platform I use, how I manage dependencies, how I achieve certain effects, how I update, how I handle images etc…

I primarily use Docker, Jekyll, Mercurial and Visual Studio Code. Click through to see how I use these things together to create what you’re reading now.

I write my posts in Visual Studio Code and the posts are formatted using Kramdown and Yaml. I use ImageMagick to format images while writing.

The blog is generated using Jekyll, which is a flat-site generator. I use Jekyll inside a Docker container.

When the blog is generated, I upload it to my Digital Ocean Droplet using Mercurial. 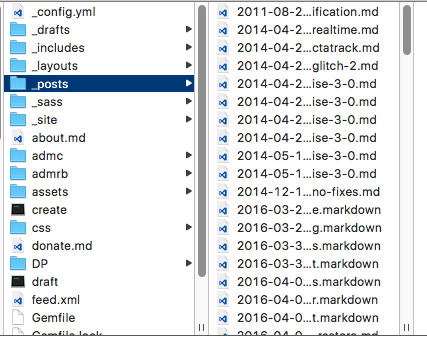 File structure is already described at the jekyll website. The only thing that I do is I categorize photos in the /assets/ directory by the subject.

Jekyll is where all the fun happens.

Many websites on the web currently accept a request from the client, then generate the page before the data is sent to the user. Jekyll works differently.

Jekyll generates the entire site locally on your computer, then you upload the website to your server. The server serves the site as it was when you created it on your computer.

The workflow is simple and the quick start guide does an excellent job of explaining how to get going. If you have trouble with versions and weird ruby errors, check out the Docker section for a way to avoid all that mess.

After that I upload the site to my web server using Mercurial.

I have no special jekyll settings or setup other than using pagination.

Writing posts in Visual Studio Code is pretty straightforward. However I have some snippets I use that make life a bit easier.

First, I suggest that you check the CSS for images section to see why I have the double underscored text after the images.

Second, I escaped the above Liquid Template tags using {% raw %}{% endraw %} around the whole thing. That stops Jekyll from parsing those links.

Here’s what the snippets do:

The idea that you upload your entire website to the server once it’s generated sounds daunting. It is. So I don’t do that.

I use what’s called an SCM. Specifically I use Mercurial and SourceTree.

What mercurial does is tracks changes to files and stores only those changes. Mercurial is running remotely on my web server and locally on my computer.

I have the remote repository setup in the /var/www/html/ directory on my server. I have the largefiles extension setup in my .hgrc file inside the web root.

Locally I create a repository in the /BlogRoot/_site directory. _site is where jekyll creates your generated site. You do not want to track the entire blog root locally. All you want to do is track _site directory.

You will need to setup ssh keys for this to work properly, but it shouldn’t be too difficult.

Mercurial does not show the changes on push unless you add a special update hook. In the .hg/.hgrc file on your remote server (or in .hgrc in your remote user home), you must add these lines:

This hook makes HG update the remote directory to reflect the changes after the push. Without the update hook, a local hg push will do nothing and you’d have to log in to the server and run hg update everytime you push.

I did that for a while. It’s not fun. The hook is better.

When the changes are generated on my computer using jekyll, I go through the following process to get stuff on my web server:

I do this in SourceTree. Just Commit, check the ‘immediately push changes to default’ box at the bottom, add a commit message, then commit.

As long as you have the update hook in place, then your changes will show immediately and you now have a blog post! (and obviously I have this in place)

No bonus. I use branches sometimes, but rarely. I usually use jekyll drafts.

You can obviously use Git for SCM, but I can’t stand the names of Git’s commands. Doing things in Mercurial is almost always simpler and more intuitive without having to remember a bunch of ridiculous syntax and in-jokes.

I export my photos from Lightroom to the directory, something like BlogDirectory/assets/PostSubject/. If I don’t need linked images then there’s nothing to do. If I want thumbnails with larger images I run this script:

The blog has 2 main scripts. One to re-organize the header hierarchy to an outline format, and one to autoplay videos.

Chrome and Firefox won’t autoplay videos, and I’ve mostly replaced animated gifs on the blog with muted looping MP4s. So every page has this script to autoplay all the videos that are ‘gif replacements’.

The script finds all of the elements with the gifvid class and plays them. Simple.

You’ve probably noticed that each sub-header on the blog has its own colour coded box for easier following of topics. Jekyll has no way to do this. So I wrote a script that re-arranges the DOM.

This script goes through and finds all of the headers, which are written as # header and ## Header in the markdown, and surrounds them with a div. What constitutes a ‘section’ is determined from Header to the next header appearance.

And with this script, my blog has an outline format that helps differentiate varying sections.

I already discussed the rating bar on the blog, but just to remind you… there it is.

The Comparator! One of my favorite features, and I’ve yet to use it enough.

In the visual studio code section I showed how I have descriptions written like __description__ after images. I have similar CSS for video as well. Here is the CSS that turns that into text under the image.

Jekyll turns __this__ into <b>this</b>. The CSS takes any bolded text after an image and styles it appropriately so that it appears as an image description.

In ‘head.html’, between your header tags add this code:

With this setup you can also add an ‘image’ and ‘description’ property at the top of your post to explicitly give the post a different image or description in the OpenGraph generated link.

I have some Liquid Template things on my blog that you may find useful.

I have a file called ‘tags.md’ in my blog root. Jekyll turns this in to /tags/index.html, and that’s what you see when you hit the ‘Site Map’ link at the top of the page.

Here’s the code to make the tags page:

Hopefully the commens are sufficient, and I’m pretty sure I ripped off most of this from a number of other blog posts.

In my post at the top I can write visible: 0 in the front matter to make Jekyll not list that page on the main site. Currently it will still be listed on the Site Map, but you can easily exclude it.

In the blog root, in index.html I have the following code:

I have similar code in the recent-posts list as well.

If you want you can use this to not list posts from the sitemap and even make an unlisted site map that shows unlisted posts. I may or may not have this… I don’t want you looking for it.

If you get some weird ruby errors with jekyll, then Docker is the solution for you.

Docker is a way to contain a piece of software in an environment that isn’t linked to your running operating system. It’s a way that we can use jekyll, without actually using Jekyll or Ruby on your local system. Docker handles all the dependencies in the container so there’s no way for you to have issues with your installation of ruby or jekyll or whatever.

Now instead of using a bundle exec jekyll serve or similar, we interact with the jekyll that exists inside docker with docker run -v $(pwd):/srv/jekyll -p 4000:4000 jekyll/jekyll jekyll serve. Yeah that sucks to type, let’s break it down:

See if you can break down the command to start a new blog in the current directory docker run -v $(pwd):/srv/jekyll jekyll/jekyll jekyll new ..

It may sound complex, but this is all fairly simple. You can easily setup a shell alias for these commands to make it simpler to type. Another option is to write small scripts, and yet another option is to just use your shell history ;)

If I missed anything, or if you have questions about anything in this setup feel free to comment below.

I’m not going to troubleshoot your problems, but if I can point you in the right direction I will.

This post took 3 hours to research, photograph, write and edit. If you appreciate the information presented then please consider joining patreon or donating!

«  Bitwig Conclusion DAW Chart v6 and Studio One 3.5 »
If you appreciate the information presented then please consider joining patreon or donating money/time