A more natural drum noise gate with Couture and Reaper

Noise Gates are a staple on multi-tracked drums. The gate turns off the volume until the drum hits and it’s near-instantly turned up for the duration of the drum hit.

There’s 2 issues with this though:

I have a method that can solve both of these things in some scenarios. It’s not a cure-all of course, and like with any production technique there are tradeoffs. Let’s explore…

I’m trying to have videos with any of these topics, so here’s the video for this:

I don’t go in depth on some things I cover in this text post, but it’s a quick overview for those that enjoy video content.

Multitracked drums rely on complex interactions between 8+ sounds at once. Rather than trying to eliminate leakage, embrace it in a controlled manner.

No free lunch here, like with most things. I don’t susbcribe to the fantasy that there’s magic-bullets in the audio world and everything has tradeoffs. Here’s some issues this presents: 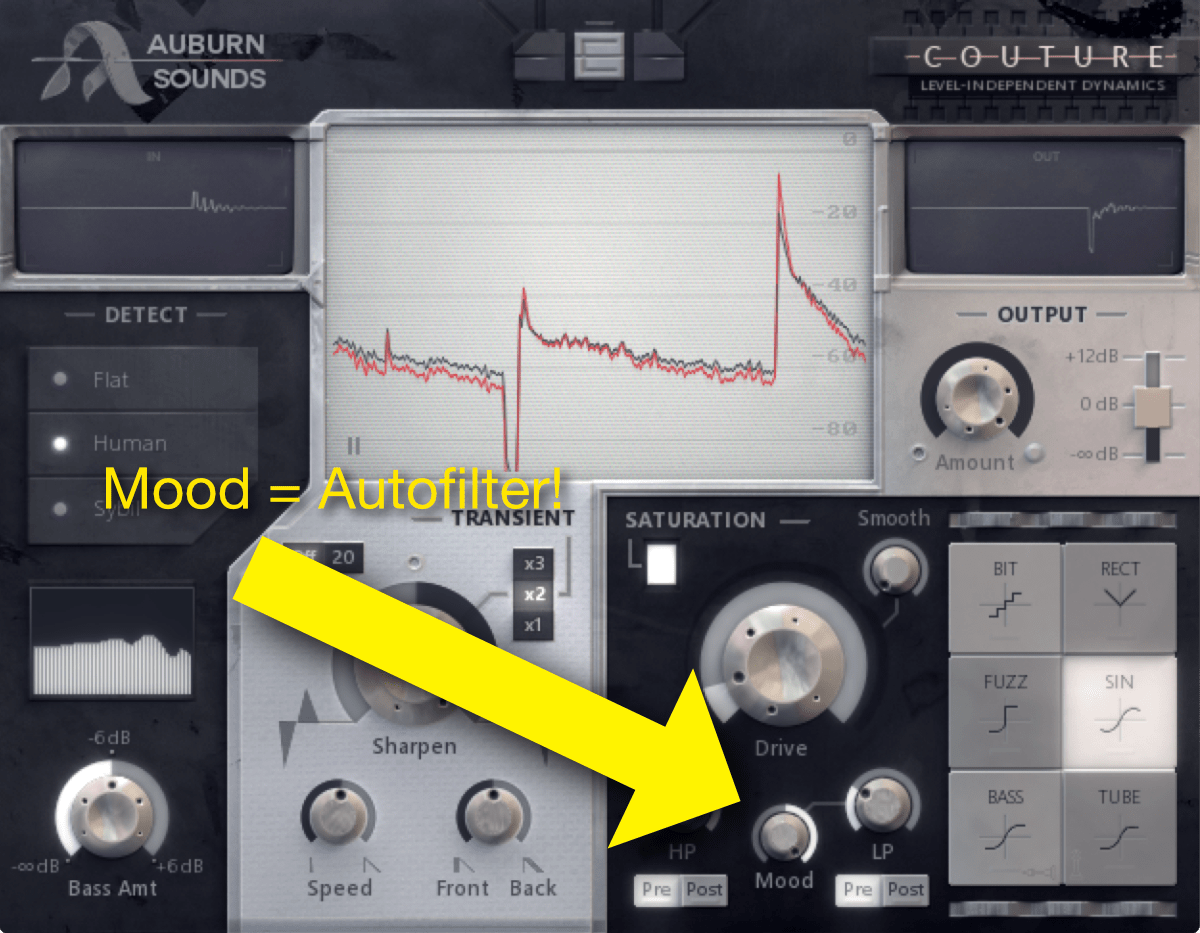 Couture is the new transient-processor/distortion plugin from Auburn Sounds, and in the saturation section there is a low-pass with a parameter called “mood”.

Mood causes the low-pass filter to respond to the dynamics of the signal. So you can have the filter close or open in response to audio.

I discovered this technique while using Couture, and despite trying many other filter plugins, Couture still does it best. It’s not only just for this trick though, and hopefully I’ll cover that in another post.

This can be done fairly well in Reaper or any DAW with audio-modulation. I’m just going to cover doing it in Reaper for now.

This is pretty quick to setup. Refer to the image above and I’ll walk you through the steps.

That’s it. You now have a noise gate setup that has a natural ‘off’ state without that big bright jump. Try it out.

If you jump to the sound examples you may notice that the attack transient is softened a bit. You may like this and you may not. If you dislike it then go to the next section.

Compensating for the attack ramp isn’t too difficult either. Once again refer to the image above.

What we’ve done here is take the input signal, shifted it back in time by 50ms, output that to a different signal bus than our main effect signal bus, and made the modulation react to that.

The result is that our filter opens before the drum hit happens. This makes the drum transient cleaner.

If you want to be extra fancy and make this whole thing sound even more natural (in context of the mix), set the time adjustment to ~100ms and use an attack time of 50ms in your modulation. This will give you a nice fade-in rather than that sharp filter sweep (which can sound good or bad depending on what’s happening).

It’s the amazing Comparator that I made entirely in vanilla javascript.

Each of these 4 versions I’ve included these varients:

To fully appreciate this, you should listen to the cymbals and less to the drums. The cymbals are the thing that is being targeted.

Some of these will sound rather weird with just kick/snare, but when listening to the “All…” samples you’ll hear some difference in the clarity of the cymbals and the overall power of the hits themselves relative to the cymbals.

I know the names are overwriting things and the GUI gets weird in some places. I’m working on it. 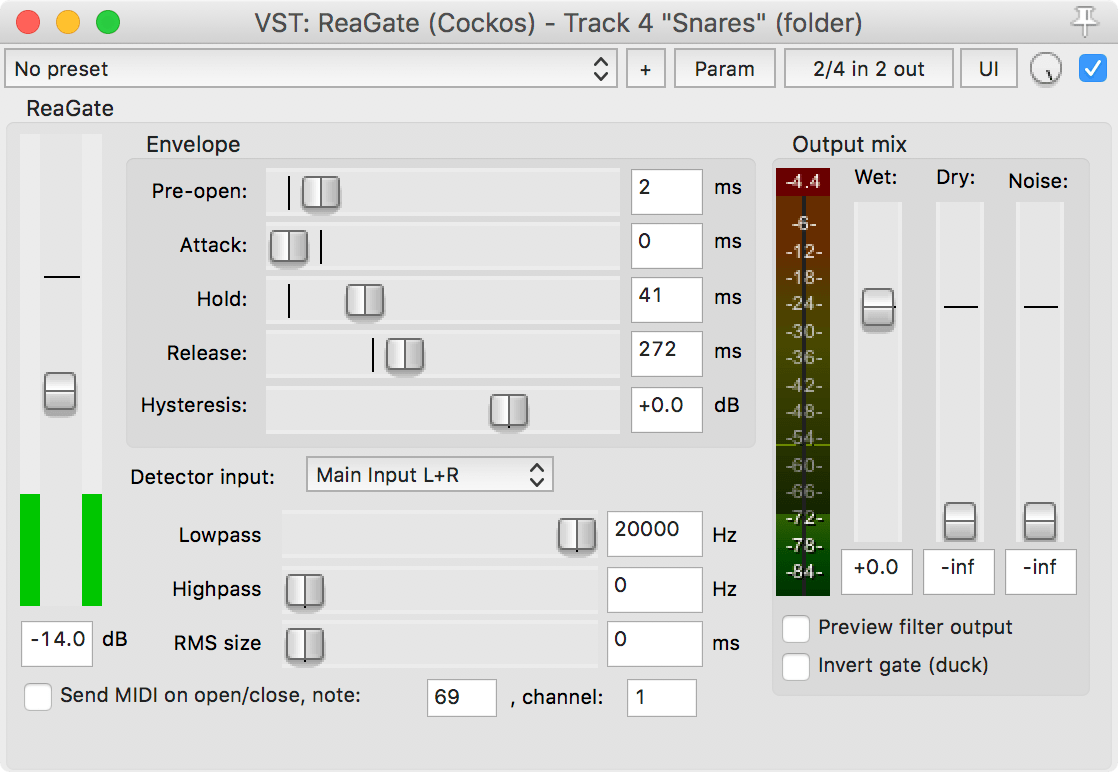 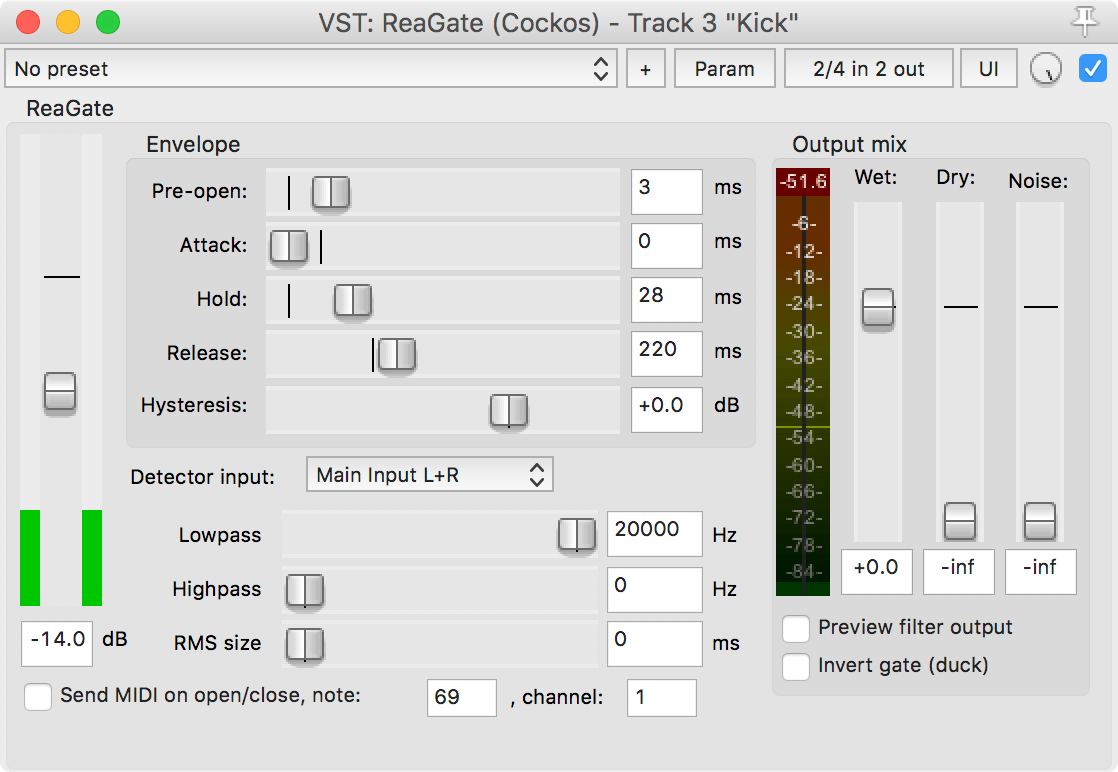 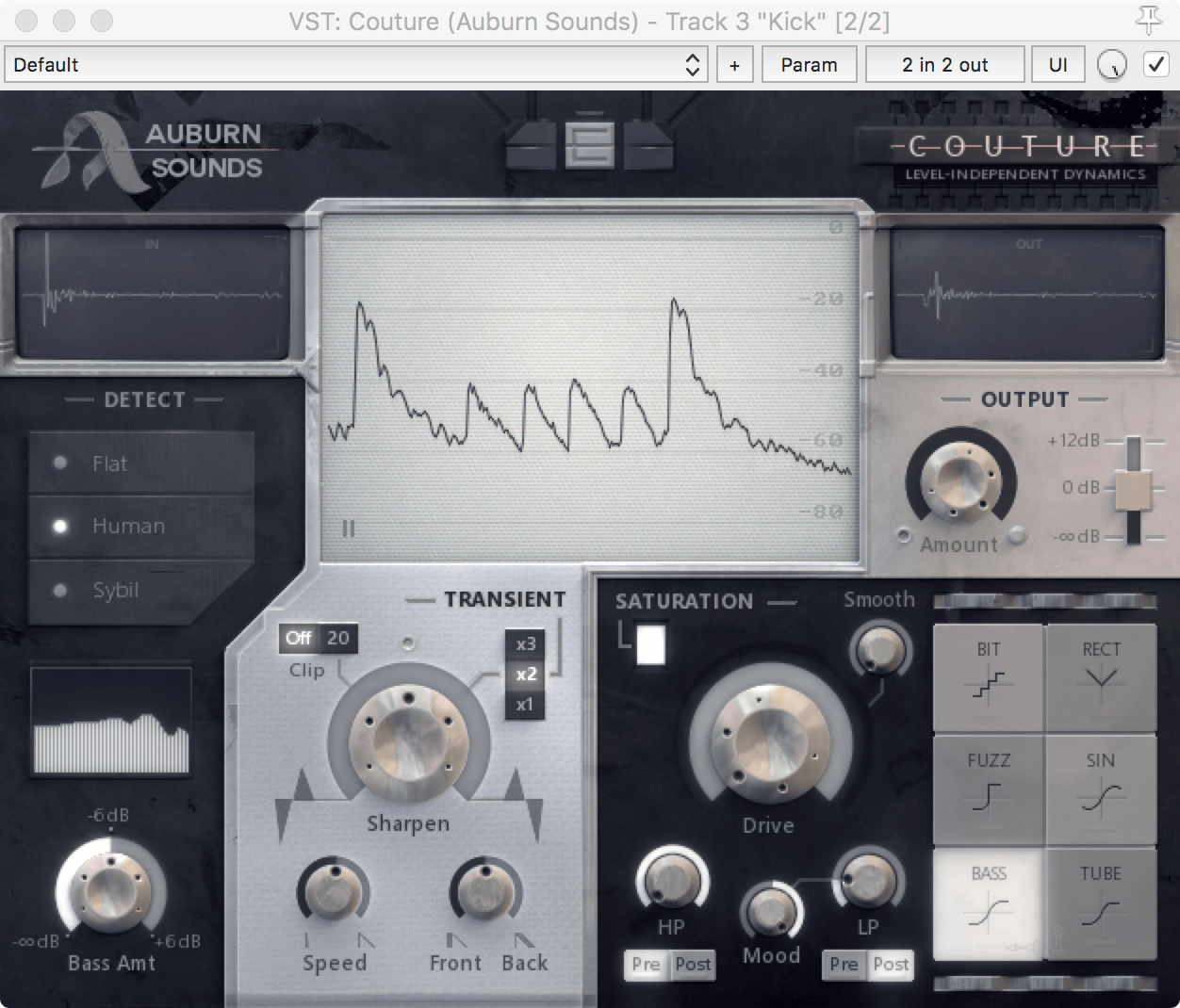 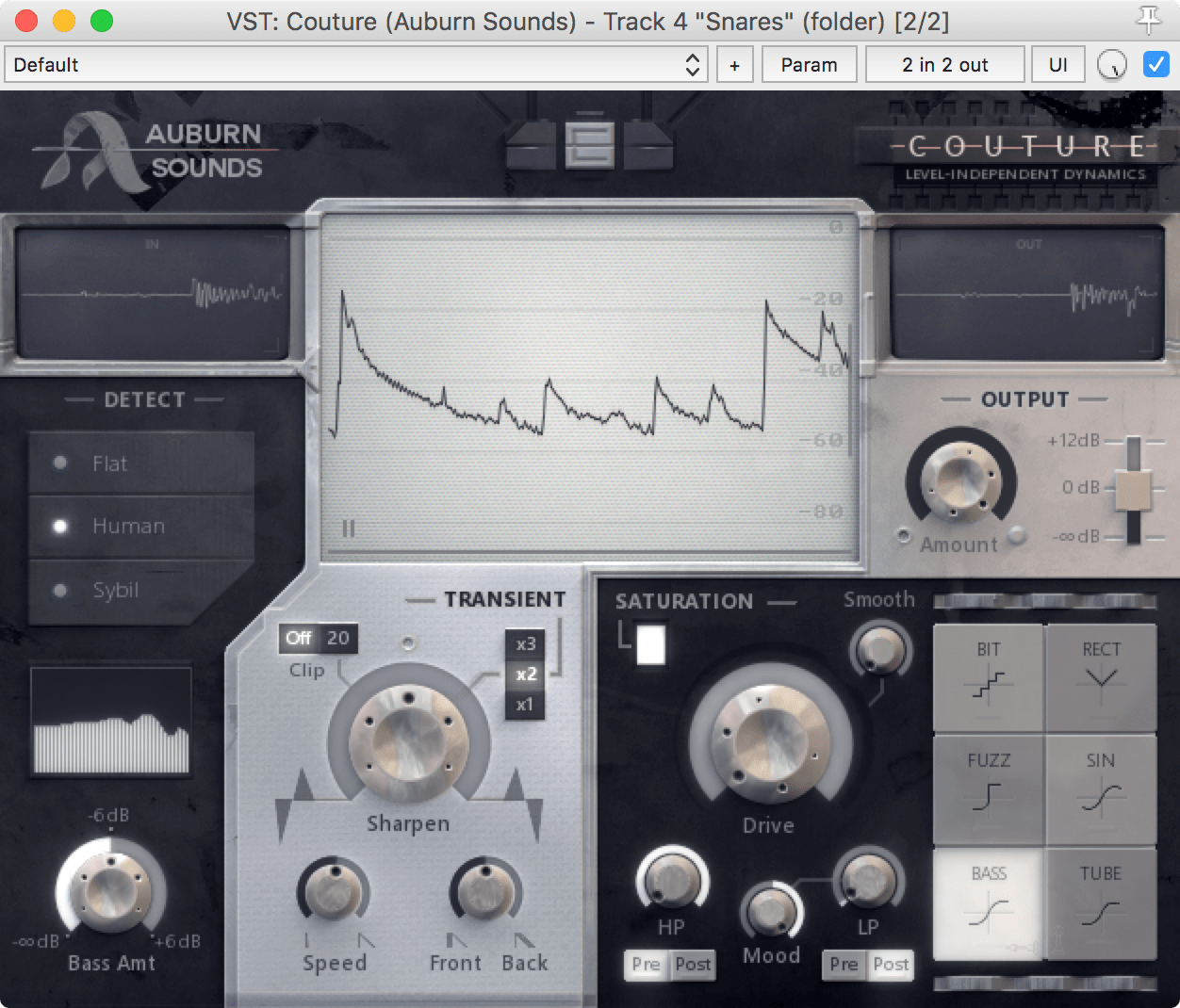 This isn’t just a Reaper trick. You can do it in Bitwig or Waveform or make it in Reaktor or Max for Live or… anything that lets you modulate filters.

I’ve tried dozens of filters and setups though, and for whatever reason; Couture does it the best. It’s extra handy because Couture is a really fantastic transient processor too.

I use Goodhertz LOHI on nearly every track, and it’s probably the cleanest at executing this technique, but you are at the mercy of your modulating source. That seems to be where Couture wins out, but for a general purpose low/high pass, LOHI is my favorite.

I have found a few situations where Cytomic’s The Drop did an amazing job of this. I already use the high-pass on The Drop very frequently for low-passing (due to another trick I abuse in nearly all of my projects), so it’s also rather convenient.

If you’re lazy though, you may as well just get Couture. If I get some time later I’ll see if I can do a review on this super awesome plugin.

This post took 11 hours to research, screenshot, screencast, write and edit. If you appreciate the information presented then please consider joining patreon or donating!

«  Bitwig 2.4 - The Early Edition - and conclusions How to use, and buy, a Leather Strop »
If you appreciate the information presented then please consider joining patreon or donating money/time