Alright, here we go. This is some fun stuff. Modulation in FLStudio.

What I mean by modulation is automatically changing parameters without link to automation. Such as having a waveform modulate a parameter, or some envelope or other means.

This is a place where FLStudio really shines, and it seems like one of those places that few FL users even venture. They should!

It’s equally as awesome as Bitwig’s modulators, but for different reasons.

How does modulation work? 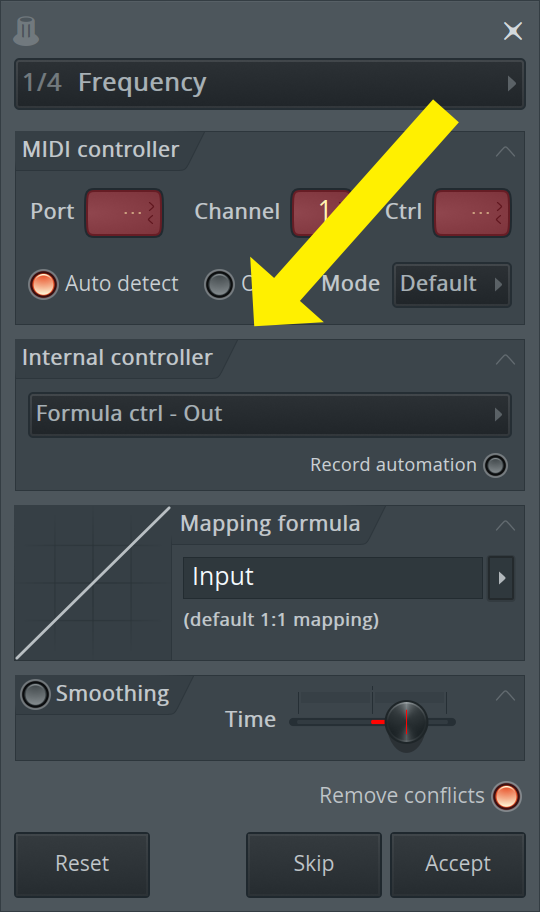 This is one of the beautiful aspects of modulation in FL: how simple it is to setup.

First check out the previous post. You use the exact same processes to link modulators, except instead of linking a MIDI controller you link what’s called an “Internal Controller”

When you have an internal controller somewhere in your project, then the Internal Controller section will show up in your linking dialog.

Now you can link that modulation source to your controller, along with smoothing and excellent mapping formulas

FLStudio has a slim number of modulation sources, which are called “Controllers”. Despite the relative few of them, they are extremely powerful. 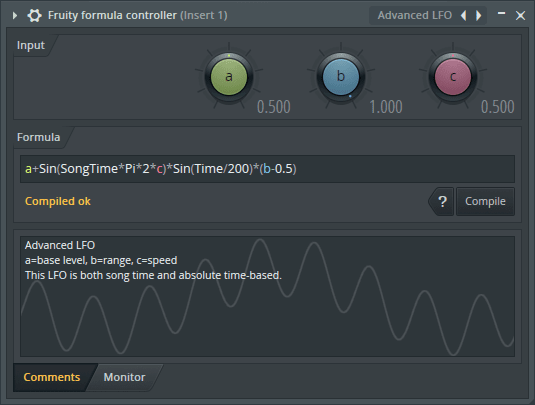 Formula controller is an effect. It doesn’t pass MIDI or Audio, but instead it allows you to use a mathematical formula to blend 3 input sources (A, B and C) or use time to create a modulation output.

A, B and C inputs can be used like normal knobs, however they are also modulation targets like anything else. Thusly they can be used to combine modulation sources, or you can use them as parameters in your formula and modulate those parameters.

Let’s check out an example below.

I have 3 Peak Controllers in LFO mode here. They go to A, B and C with a formula of a*b+c.

A*B causes the two sines to combine in the matter seen below, turning on the square wave offsets that modulation as the square progresses through its cycle.

I tried to choose something easy to see with multiple modulation sources interacting, but you can do far more complex things here.

Remember as well that this is controllable via hardware as well. So if you want to adjust the output of your controller (assuming mapping formulas won’t do it), or combine it with something or “If this, then that”, you can do it.

There’s times where other controllers won’t do exactly what you want, but Formula Controller makes nearly anything possible.

Peak Controller is another effect Controller. It takes audio input, generates an envelope of that audio input based on the settings and outputs that as control data.

Peak Controller also has LFO capabilities that are simpler than Formula controller, and with more control that means… That’s right! More modulation sources. As with nearly all of the Controllers, you can modulate their parameters as well. The video above is even more easily possible.

Peak Controller outputs the LFO section and Envelope (called “Peak”) section separately, and has a “Peak+LFO” output where the peak and LFO are combined.

Probably the most common use I’ve seen of this is for sidechaining. Putting Peak Controller on a kick track, then having the “Peak” signal controller a volume knob on the bass. This makes the bass’s volume change when the kick hits. I think there’s a much better way to do this though…

I have a kick on every beat above. I also have a bassline playing.

The kick has a Peak Controller on it.

The bassline has Fruity Parametric EQ 2.

The kick’s Peak Controller is linked to the low-mid band of PEQ2. The mapping formula is inverted. I then adjusted the settings so that when the kick hits, the low-mid band on the bass’s EQ reacts and makes room for the kick.

This setup gives you a much thicker sound than turning the volume down on the whole bass track when the kick hits. You can selectively duck certain frequencies where the kick/bass fight each other, and allow both instruments to have the fullest sound possible.

This is just one of many possibilities with FLStudio’s Internal Controllers, if you spend some time fooling around you can come up with many, many more. 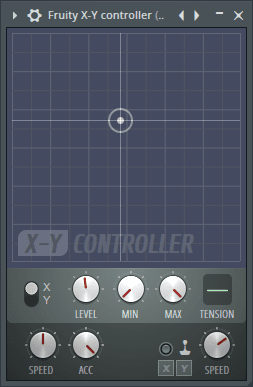 The XY controller is an XY pad. Duh.

There’s more to it than just that though, because there’s a speed and acceleration control. The movement of the X/Y position is slowed and smoothed depending on these parameters. You can use this to link other controllers to X/Y and use this as a slew rate limiter of sorts, which is really neato.

There’s joystick settings that allow you to map various joystick parameters to X and Y as you wish.

The XY controller but with a Z… and more!

The basic premise is the same as the xy controller, except XYZ also has input mapping panels that allow you to adjust the mapping scale of each parameter.

The mapping panel has bezier curves, undo(!), grid snapping (which is weird), and a variety of tools like decimate, normalize, analyze audio, filter smooth and inversions. There’s also a sequence editor, which I’ve yet to find use for in this context, but I’m sure there’s something possible with linking a controller to it and have a single knob control the progression of a sequence.

Isn’t it annoying when you’re constantly having to dig through a couple windows or menus to change a parameter on a plugin? Maybe a reverb level or some compression or perhaps your mixer just won’t order your tracks exactly how you want?

I’ve created an example above, where we have a few things happening:

All of these controls can be linked to modulators as well. They are all targets for modulation.

Creating controls in the control surface can be a pain. There’s a lot of right clicking to adjust names, styles, colours etc… For some of that you can use:

This is basically a separate application that lets you design controls as you want, then you can drag the pointer icon in the upper right to your Control Surface to add the control.

You can make some attractive widgets in the control creator, which makes creating your own control surfaces more fun than it out to be.

Envelope controller is what it says. It’s a generator (or instrument if you prefer) that responds to MIDI input. It gives you a number of envelopes: 8 articulations of the following:

The envelope controller is exceptionally powerful, and it becomes even more powerful when used with Layers, Patcher or any setup that allows you to send the same MIDI to an instrument(s) and Envelope Controller at the same time. Now the notes used to play your instrument also create modulation.

Then again, you can sequence your modulation exactly how you want separately anyway!

Keyboard controller works somewhat similar to the Keyboard and Velocity modes in the envelope controller. The main difference is that you can manually assign the output to keys rather than drawing on a graph.

There’s a great “automap” mode that will linearly map the white keys or white and black keys across the keyboard, and you can set the min/max keys by resizing the lightened part on the keyboard.

Attack and Release work differently than you may expect, and I really like how they work. Attack controls how quickly the modulation moves to a higher value. Release controls how quickly it moves to a lower value. So if you wanted a sweeping cutoff, that instantly drops back down when you play a bass note, you can do it. You could also have smooth transitions to softer played parts, but instant modulation when you start hammering it out. 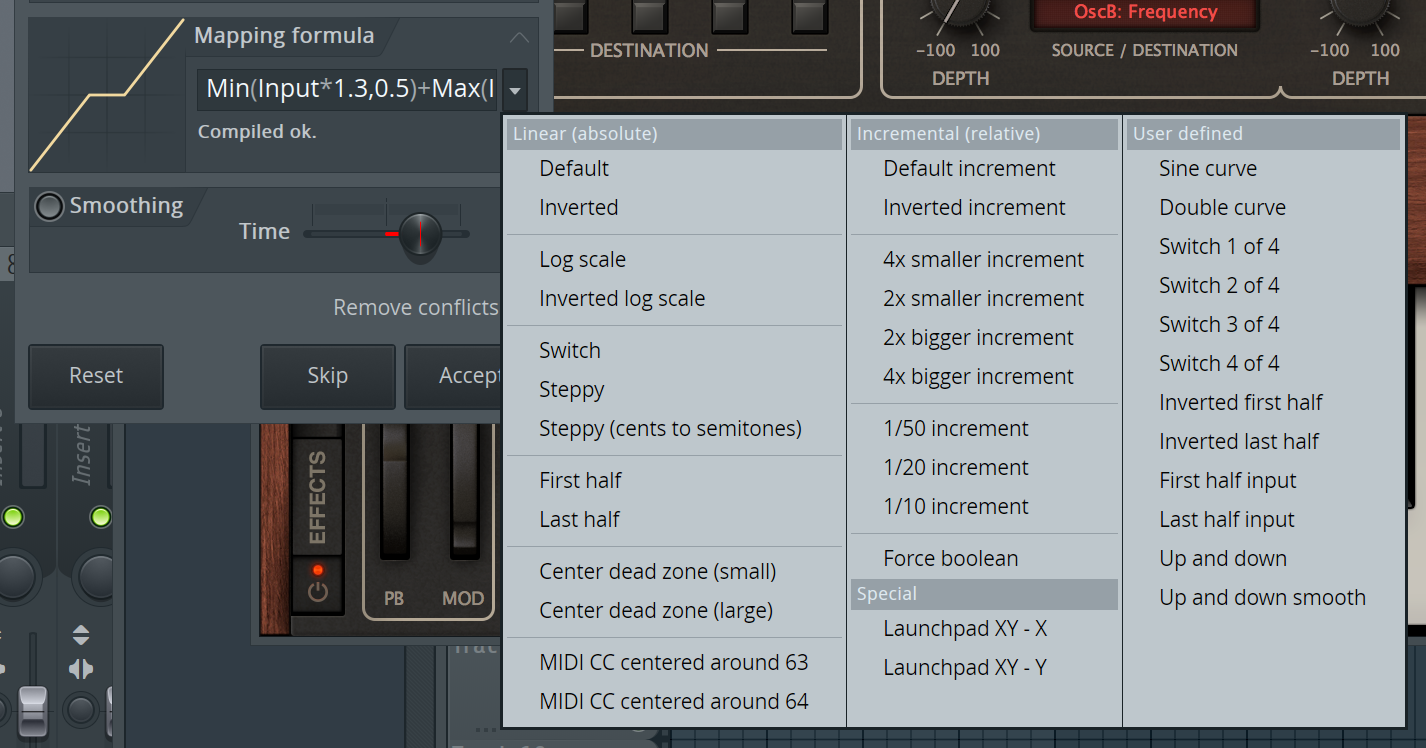 Mapping Formulas are awesome. On ANY control you assign, you can remap the input to output.

You can make it exponential, log, introduce dead zones (portions in the middle with no change), invert values, set min/max, scale things in many ways.

All the math and programmatic things available in the formula controller are here except time-based things.

If your linked controller isn’t scaled exactly how you want it, or you want it quantized, or some crazy shape… you can do it without needing to grab anything else. 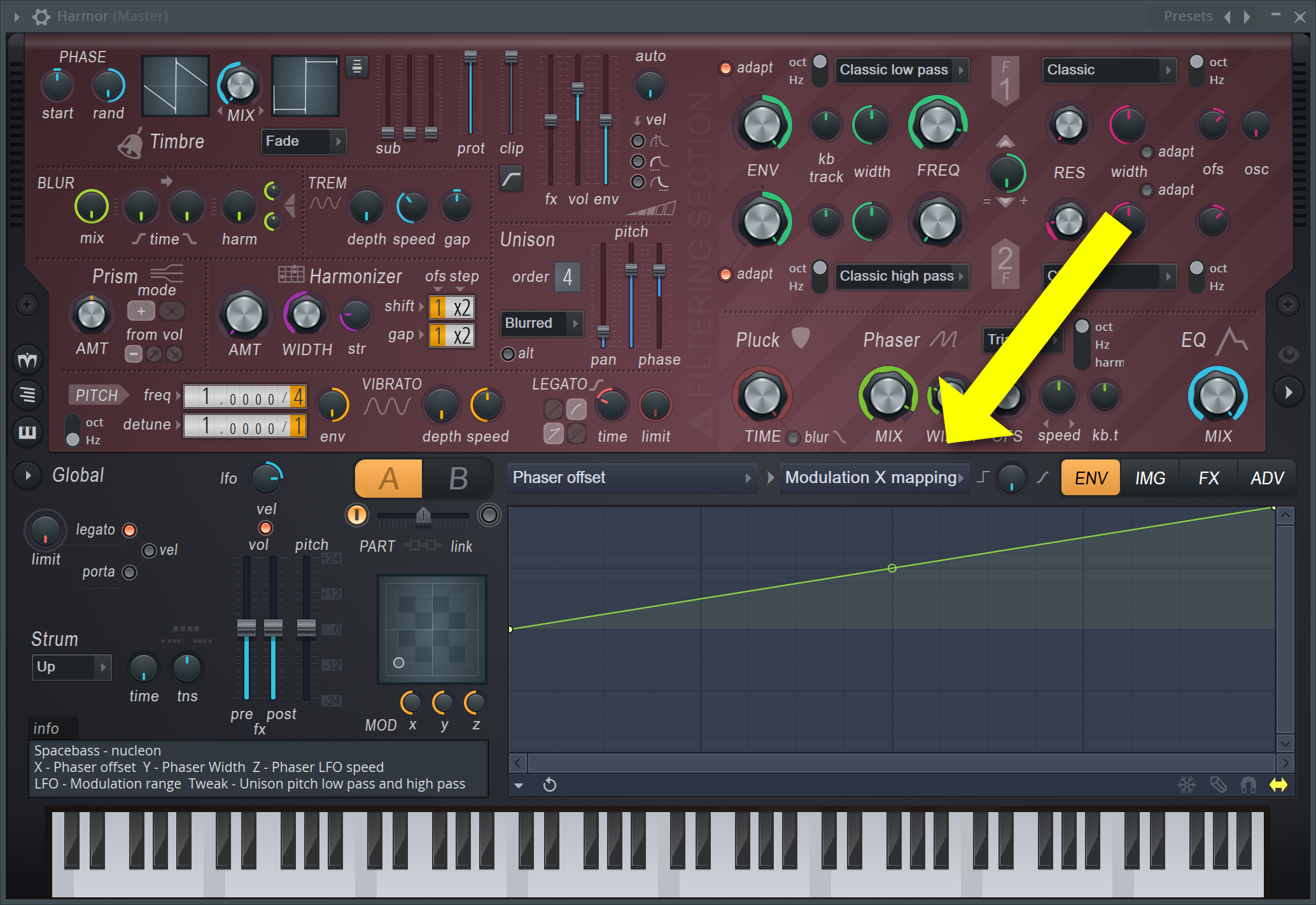 If you read the Bitwig series on modulators then you may recall that you can modulate things ‘inside’ effects. Like per-voice modulations or modulating things inside the tank of a reverb.

FLStudio doesn’t really have this, but it comes close sorta. Many native synths respond to 2 parameters called ModX and ModY, and these are assignable inside the synth.

These parameters can be mapped inside the synth to things you may not have mappable parameters for. Modulating/Linking ModX/ModY allows you to ‘reach deeper inside’ the synth to do more cool stuff.

Yeah. There’s some cool stuff here. There’s a small selection of extremely flexible tools that allow you to modulate nearly anything you can touch or automate, and the process for using them is simple.

This post took 11 hours to research, screenshot, write and edit. If you appreciate the information presented then please consider joining patreon or donating!