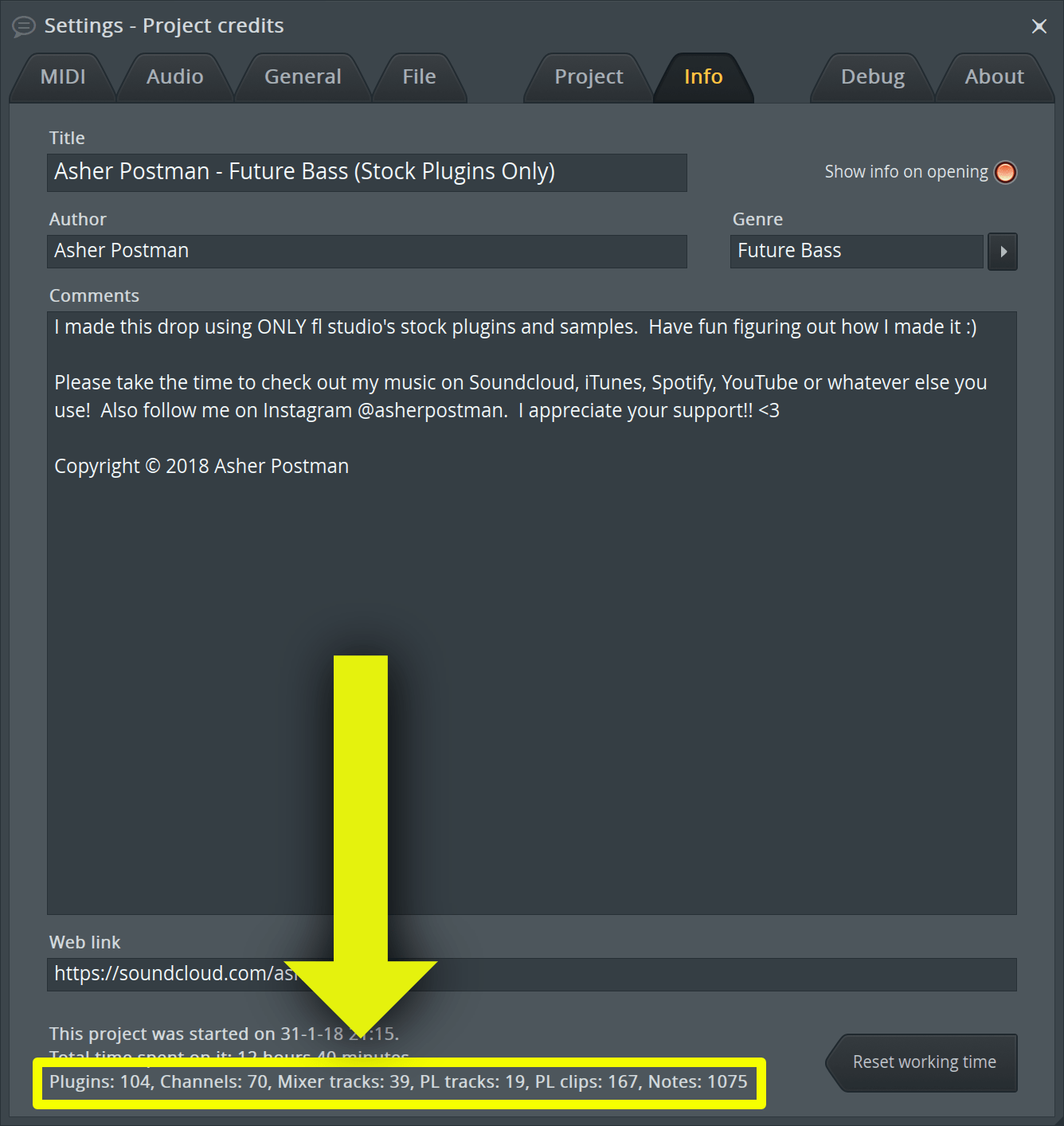 FLStudio 20.1 is out. The official change page is here. I’m going to be going over the changes, see if I notice anything extra, and wade through a bit of the hype to see how cool this update is.

I wouldn’t call it ‘Exposed’ for no reason though… 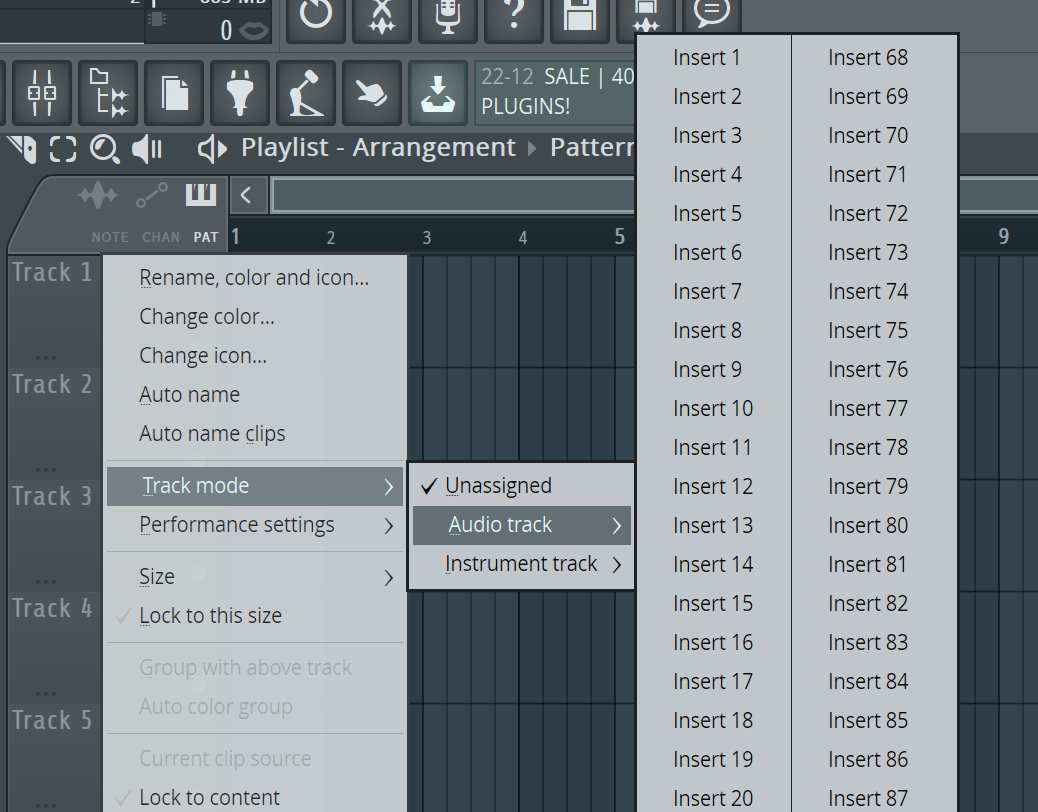 You can now drag a sample or a generator directly to a playlist track, and then the channel rack, playlist and mixer are now ‘linked’. This supposedly should fix something that I complained about in a previous post.

Before I get on with the part where this feature is not particularly useful, I would like to first list some of the benefits that it offers.

These are quite cool things and it gives you a workflow that is somewhere to other DAWs.

There is a fairly significant issue here if this was meant to give you a more linear workflow.

The #1 issue is that the real setup is this:

So what does that mean? Let’s look at the video above.

I have the track mode set up so that the Retro logue channel is linked to playlist track one which is linked to the mixer. So naturally you would think that if I have a clip corresponding to the Retroloue channel in the playlist on track 2, then it would naturally play to mixer track 2.

Of course it doesn’t though! That would mean that clips need to automatically change their routing when they are moved in the playlist, but they do not. Not having this feature means that you do not have a linear-like workflow.

Playlist tracks are only superficially linked to the mixer and channel. You can still place clips anywhere in the playlist

This does not mean that the track-mode feature is useless. It’s an incredibly useful feature for people that are used to FLStudio’s method of working. If you are a person who does not use FLStudio, or was partially interested in FLStudio but don’t use it because of the workflow, then this is not going to change a single thing for you. There is still a disconnect between the playlist and the channel rack/mixer.

So what if clips did change their routing when you move them to a different playlist track?

Trackmode for audio does what you’d expect.

That last one is the big one. With the track list audio mode, if you move an audio clip to a new playlist track, the routing for the audio clip changes if that playlist track is in audio track-mode.

This does give you the ‘linear DAW’ workflow.

CDEC, they're gonna get wiped from the face of the earth!

Anyways, as you can see in the video, if you rely on the audio-track “linking” (scare quotes), you’re in for a serious disaster.

The feature is a great start to becoming more organized, but it is not the silver-bullet. It’s still possible to end up with a complete routing mess.

There is also a bug currently…

I’m fairly certain this is a bug. If you adjust the channel routing to an audio-track-mode clip, then move the clip around, it will reset the channel upon returning to the track.

This means that as of 20.1.1, you can’t reliably change the channel routing of an audio-mode-track.

One of the benefits to the new audio-track–mode is that you can replicate a workflow that looks somewhat like recording takes in another DAW.

FLStudio will automatically group tracks when recorded to the same playlist channel.

There’s a few snafus here though:

This is a feature that I think needs a lot more work to be useful. It’s easy to make mistakes (record channel assignment events, forget to mute a channel) and the workflow is too complex for something that should be as simple as “Assign input, Press Record”.

When working on a project is fairly common to try out ideas and decide that they do not work how you expected them to. You may have done a number of organizational tasks like changing the icon changing color or setting up groups and then decided that it was all unnecessary.

Before FLStudio 20.1 this meant that you had to do some work resetting everything, and you are likely to end up still having those empty gaps.

This new macro automatically resets mixer tracks and then shifts everything to take up that empty space, so the end result is that it appears that nothing ever happened.

It is a small thing, but it is a huge feature for people that enjoy having their projects organized.

These are all nice features. In previous posts I did not discuss what “swing mix” is.

Swing mix lets you apply a multiplier to individual channels that changes the amount of swing that is applied to that channel. Previously if you want to change the swing mix of various channels at once then you had to go through each channel and do it manually. As described above you can now change the swing mix value of multiple channels in a single swift move.

The new “Loop All Channels” allows you to set a step size for your channel rack larger than what the loop sizes than independently choose which channels loop for the full channel rack step size.

You can freely choose which channels loop, or have channels with longer step sizes and unique information.

This could be a really neat feature…

Loop Bugs (Watch with audio on)

I found a good number of bugs with phantom notes, notes that wouldn’t play, loops that wouldn’t change and once I somehow managed to make my channel step size control do nothing.

This is a feature that the FLStudio team got totally right (besides 2 bugs I found).

Channels can now be individually looped, that is to say that they can have their own step sizes, and this allows you to create interesting rhythms.

Not only does this allow you to create interesting rhythms, but also allows you to simplify creation of simple ostinatos. If there is a rhythm that you would like to continually be played underneath your main pattern, you no longer need to program that entire thing. it is now possible to simply program the ostinato pattern and then set the step size to what the ostinato is encompassed by.

This is a super cool feature, especially in the context of how FLStudio handles routing.

The previous default behavior was to show only the notes that would be visible for the amount of time the current channel step size would allow. This means that if you had a 12 bar part, but the channel rack was only displaying four bars, then you would only see four bars of your piano roll part.

You can now optionally show the entire part no matter how big the channel rack is.

Having a mixed control for each effect is not the most revolutionary of features, but it is a feature that is incredibly useful. A mix control and in effect allows you to apply a volume reduced amount of the effect to the original signal passing through. This is like having a send per effect.

Mute turns the effect on or off.

Solo is the grouped inverse of mute. When you solo in effect than every other effect on the channel is muted. Not many products have a solo effect feature, and I love using this feature when it is available.

EDIT: This seems to be unrelated.

The feature works for sampler channels, but not audio channels. So either the changelog is wrong or this is still bugged. 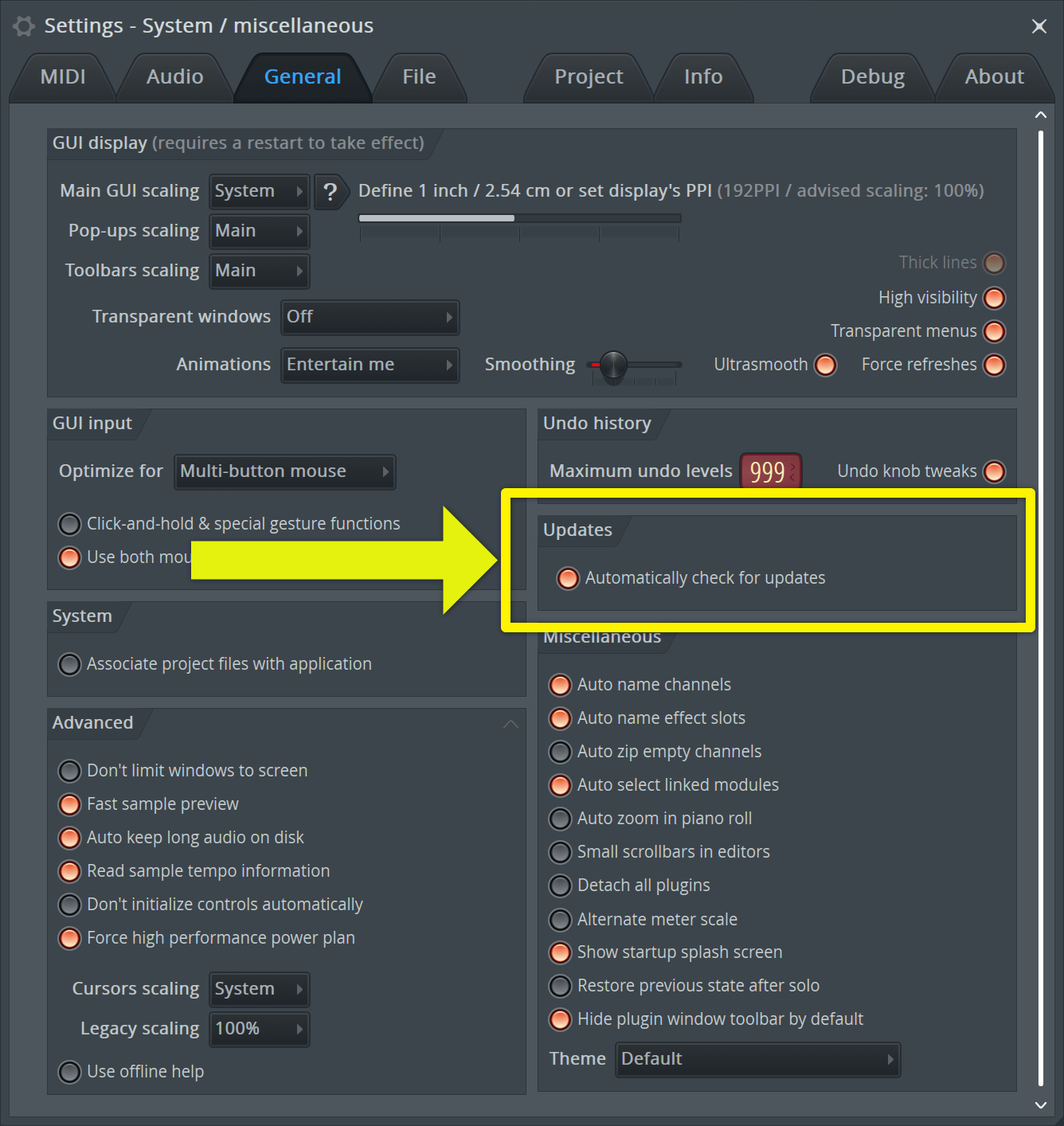 FLStudio will know check for updates by default. This behavior can be turned off in the general section of your settings. 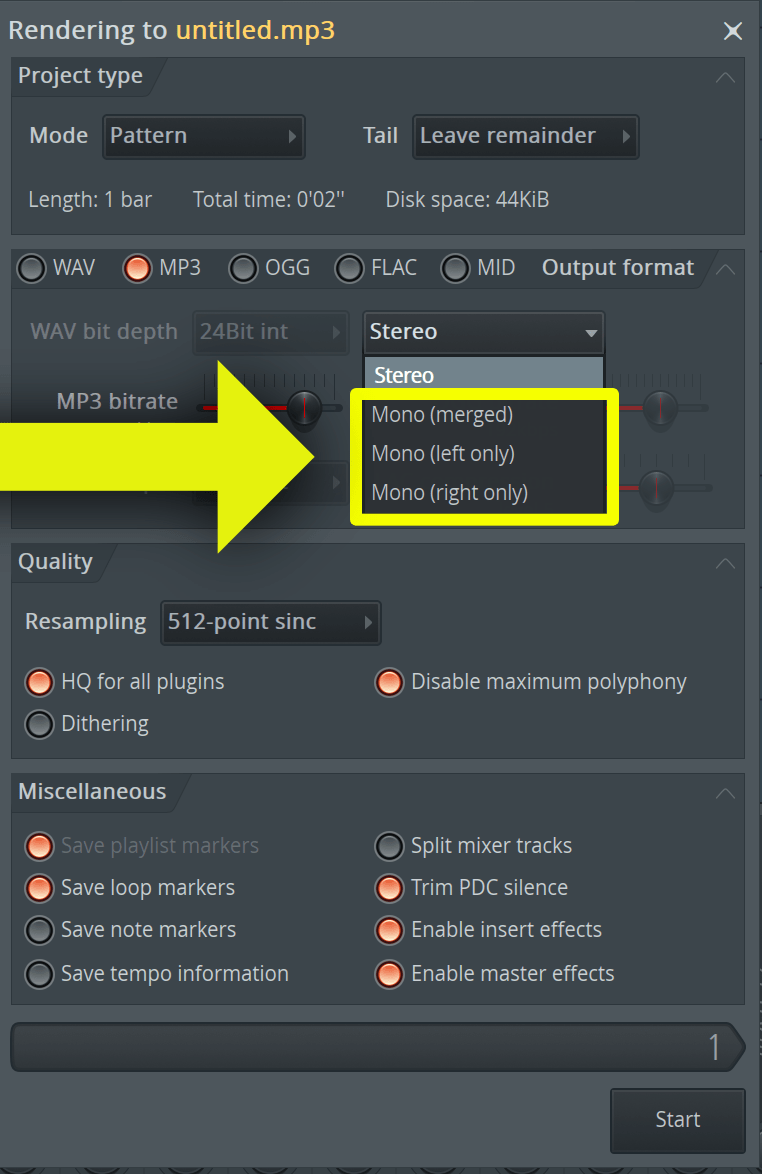 There are now three modes to export a mono mix: Left only, Right only and Left + Right.

This feature doesn’t have too many uses, but it can be useful for podcast exports, post/dialog, and mono referencing on other systems. There’s possibly some other reasons I’m not thinking of as well. 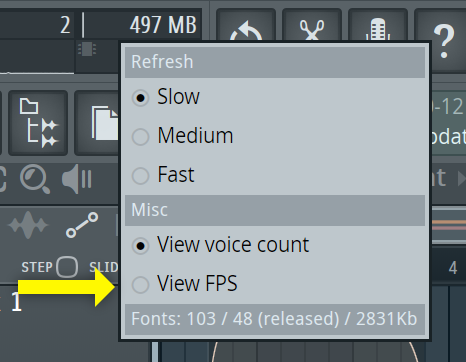 You can now see the FPS of FLStudio. Unfortunately this is mutually exclusive with the “voice count” feature. If you wish to see both the FPS and the current voice count (the number of ‘things making sound’ currently) then you are out of luck.

Projects to statistics has been expanded with information about the project itself:

I wonder if this will be used for some sort of competition in the future. 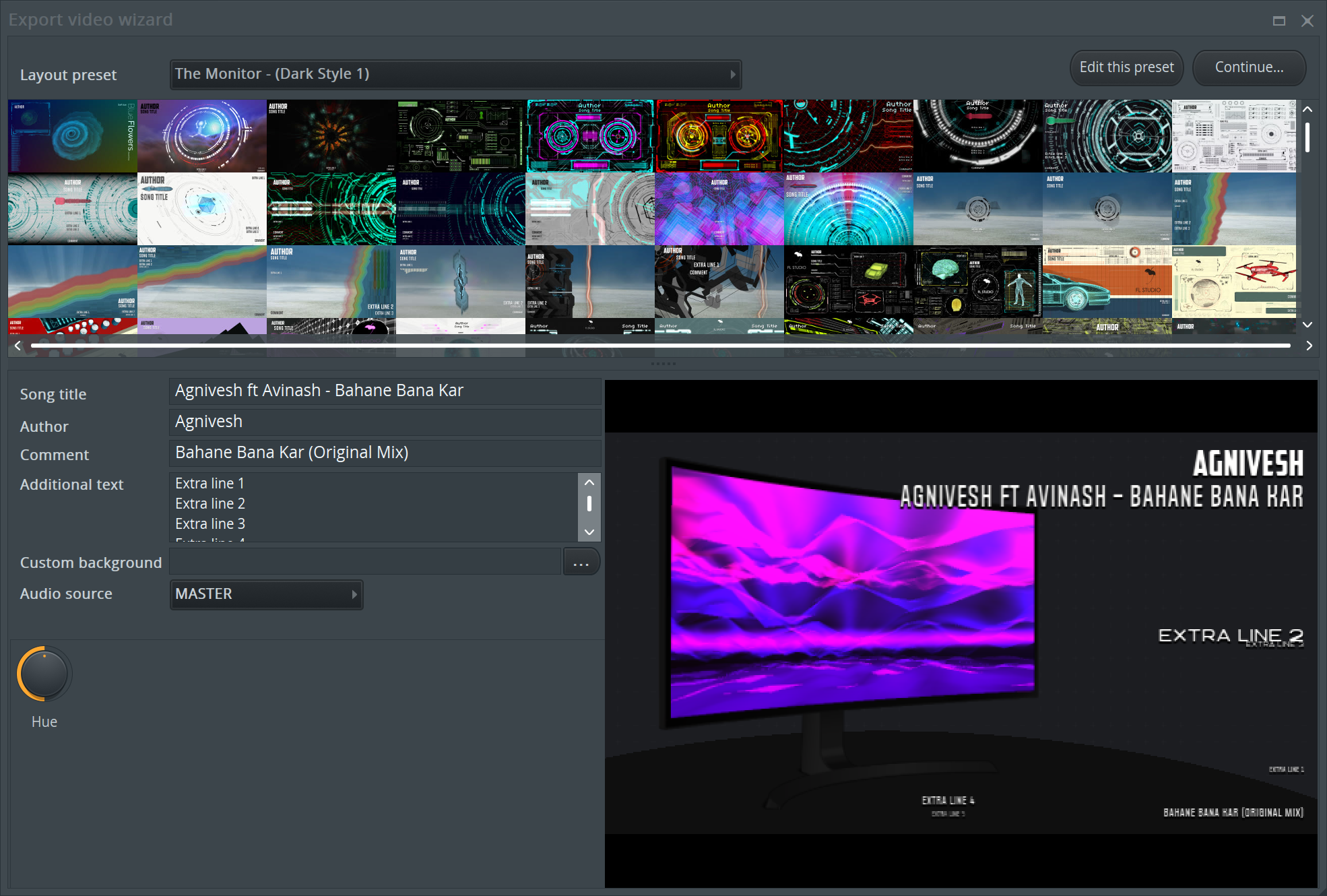 Quick and easy export for making those youtube videos with an image that moves to the music.

I can’t tell you how many 1,000s of times I’ve seen someone ask how to make these. This is going to be a beloved and overused feature for certain.

(Pardon my tone, but I seriously get asked this daily.)

You can read more about it here, same link as you’d’ve found in the Official Changes.

This update is a great push in the correct direction. It is only a “point one” release so expectations of flawless progress are likely unreasonable.

Some of my issues are with how this was marketed in that it seemed that they were pushing this as a solution for FLStudio’s complex, and sometimes very confusing, workflow and routing.

This update provides what we software developers call “syntactic sugar”. Nothing is changed in the underlying software or with the natural workflow. There has been some things added that make it easier to start or to manage small things, but once you actually start working on a project you will seek quickly that the workflow is the same as it always always been.

Hopefully the guys on the FLStudio team will iron out the bugs, and provide a way for clips to intelligently adjust their output as they move around the playlist. I suppose this should be an optional feature for all the people who enjoy the way it currently works, like me!

I quite enjoy working in FLStudio the way it is now. I am usually willing to accept the wonderous complexity with the trade-off of easily making mistakes or becoming lost in your own project. My main concern with this update is seen new features that are marketed as workflow enhancements but are really just half-cooked sugar on a cake that was already plenty sweet.

This post took 11 hours to research, screenshot, write and edit the post. The video took 8 hours to capture, edit, overdub, composite and upload. If you appreciate the information presented then please consider joining patreon or paying me for my time spent bringing you quality content!

«  30 days with Cakewalk - Part 1: Almost Everything. Vanessa Heinl Interview »
If you appreciate the information presented then please consider joining patreon or donating money/time